Many US banks are instal­ling new ATMs to allow custom­ers to order cash on a mobile applic­ation
By AFP
Published: February 21, 2016
Tweet Email 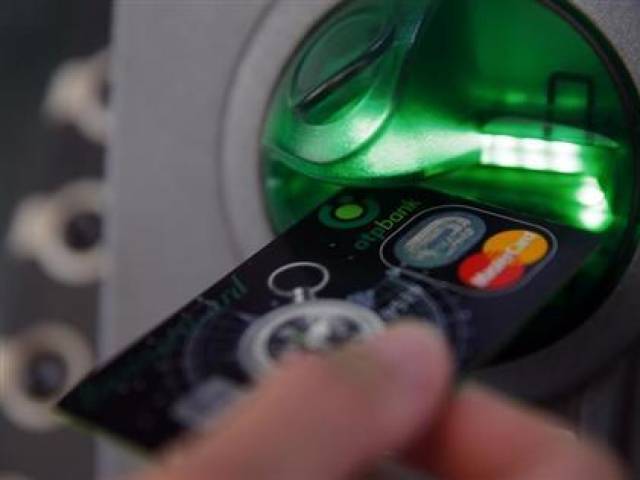 WASHINGTON, DC: Here’s another use for the smartphone as it invades daily life: in place of your debit card at your bank cash machine.

The “cardless” automatic teller machine (ATM) is gaining ground in the United States and around the world, with smartphone technology allowing for speedier and more secure transactions.

Dozens of US banks are installing new ATMs or updating existing ones to allow customers to order cash on a mobile application and then scan a code to get their money without having to insert a bank card.

US banking giants Wells Fargo, Bank of America and Chase are in the process of deploying the new ATMs, as are a number of regional banks and financial groups around the world. Makers of ATMs and financial software groups are ramping up to meet this demand.

“We think our model (using smartphones) reduces a lot of vulnerabilities,” said Doug Brown, who leads mobile technology for FIS Global, a major provider of software and technology for ATMs.

Brown said the FIS cardless system is being used at some 2,000 ATMs operated by at least 28 banks in the United States “and we’re looking to rapidly expand that.”

He said the system should be operational at some 80,000 machines in North America over the coming 18 months. And similar changes are coming in other countries, according to Brown.

In addition to speeding the transaction time, the smartphone-based system aims to curb the growing problem of “skimming” in which criminals steal the data on a card, often by inserting devices into the ATM card slot.

By some estimates, skimming cost the global banking industry some $2 billion in 2015 and can lead to other kinds of fraud when card data is stolen.

“Consumers are aware of this, they really understand and welcome this,” Brown said.

Another security benefit, Brown said, is that authenticating on the handset reduces the time spent at the ATM to around 10 seconds instead of the typical 30 to 40 seconds

“The performance is kind shocking to some people, they almost jump back at the instantaneous response,” Brown said. “But it provides more physical security because they can make the transaction faster.”

Bank of America spokeswoman Betty Riess said the group is “currently developing a new cardless ATM solution” based on NFC or near field communication technology to allow customers to authenticate without the use of a card.

“We’ll roll out this capability in late February to associates in select ATMs in Silicon Valley, San Francisco, Charlotte, New York and Boston.” Riess said. “It will be followed by a broader customer launch mid-year.”

Chase said it is planning a similar rollout sometime this year.

“When we first roll this out, customers will be able to request an access code through the Chase mobile app and enter it at the ATM to do their transactions,” said Chase spokesman Michael Fusco.

“Later on, they will be able to use their digital mobile wallet to complete the transaction at the ATM.”

Wells Fargo is also on board, developing ATMs that will allow customers to use their smartphones to obtain and eight-digit token to authorize a cash withdrawal.

Some of the new technologies will require only a software update to the ATM, while others will need new hardware.

ATM manufacturer Diebold is testing a “headless” teller machine, without a screen or keypad, which dispenses cash from interaction on the smartphone.

“What we are saying with this is forget the card reader, forget the PIN pad, we all have these devices in our pockets,” said Dave Kuchenski, Diebold’s senior business development manager for new technology.

Customers need only verify their identity, which can be done with the device’s fingerprint reader, or possibly with an iris scanner on the ATM.

While some existing Diebold ATMs can work with mobile applications, Kuchenski said the new concept, in testing with Citibank and others, could provide “a better user experience.”

“We don’t have to walk through the same process which we have had since the ATM has existed,” he said.

Fiji cleans up after ‘strongest ever’ cyclone