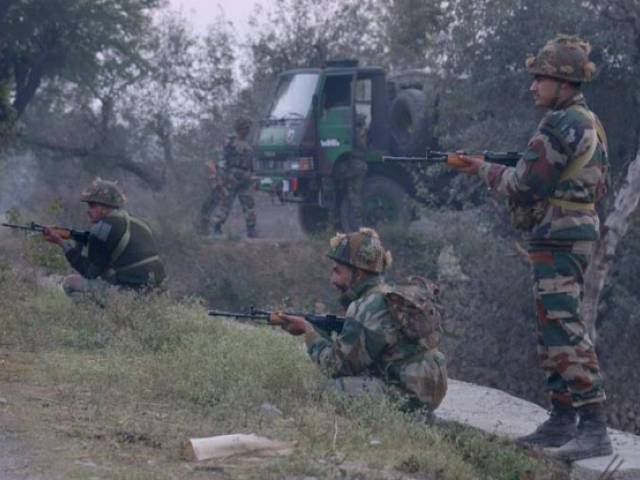 Indian Army personnel stand alert near the Air Force Base in Pathankot, on January 2, 2016, during an ongoing attack on the base by suspected militants. PHOTO: AFP

The national security advisers of Pakistan and India have finalised the itinerary for a Special Investigation Team (SIT) to visit Pathankot in Indian Punjab, where terrorists had mounted a brazen attack on an airbase early last month, The Express Tribune has learnt from official sources. A delayed meeting between the foreign secretaries of the two countries will be arranged following the visit of the SIT, possibly in March.

This comes a day after Pakistan registered an FIR of the Pathankot assault which New Delhi alleges was carried out by Pakistan-based Jaish-e-Muhammad militant group. Seven Indian security officials were killed when six gunmen sneaked into the Indian Air Force Base in Pathankot on January 2 and engaged troops in gunfights for three days. In the end, all six attackers were also killed.

India shared the ‘leads’ with Pakistan which, in turn, agreed to help with investigation. Subsequently, the prime minister formed the SIT and a Punjab-wide crackdown against JeM was launched. A scheduled meeting between the foreign secretaries was put off with ‘mutual consent of the two countries’.

National Security Adviser Nasser Khan Janjua and his Indian counterpart, Ajit Doval, have been in contact throughout this episode. They agreed that after the registration of the FIR, a visit of the SIT would be arranged in March to follow through on the Indian investigation into the Pathankot attack.

“Janjua and Doval have almost finalised the schedule of SIT’s visit in March,” a top government official told The Express Tribune. “A meeting between the foreign secretaries will follow.” Sources added that Indian Foreign Secretary S Jaishaknar would visit Islamabad after the SIT trip to discuss a mechanism for the Comprehensive Bilateral Dialogue launched by India’s Foreign Minister Sushma Swaraj and her Pakistani counterpart Sartaj Aziz.

Doval’s office has communicated to the Indian ministry of external affairs to make arrangements for SIT’s visit next month, sources said, adding that New Delhi would soon announce the itinerary.

Sources said the United States was instrumental in the registration of the Pathankot FIR by Pakistan as it wanted the nascent dialogue process between the two countries to go ahead. The Obama administration while finalising the F-16 deal urged Islamabad to take some concrete steps on the Pathankot attack probe so that it could persuade India not to scrap planned talks, sources added.

They also said India was skeptical about cooperation from Pakistan. And even registration of the FIR by Islamabad was no less than a surprise for the Indian officialdom. India is trumpeting the move as a big success of the Modi administration, they added. Encouraged by the FIR registration, the Modi administration gave Doval the go-ahead for an SIT visit.

The Indian prime minister and his team would use the SIT visit before the foreign secretary-level talks to preempt any criticism from detractors of his Pakistan policy, source said.

AIG Counter-Terrorism Department Punjab Rai Tahir, who is also convener of the SIT, neither confirmed nor denied the proposed visit of his team. “Such a visit needs a policy statement and I cannot give any such statement,” he told The Express Tribune.

The SIT’s mandate is to inquire into the ‘leads’ provided by India. After one and a half months, the SIT recommended on February 18 registration of the FIR.

Still, it says that based on its inquiry there is no substantial evidence to suggest that JeM chief Maulana Masood Azhar was in any way involved in the deadly siege.  IGP Punjab Mushtaq Sukhera also confirmed that the SIT has cleared Maulana Azhar – and this is why ‘unidentified men’ have been nominated in the FIR.