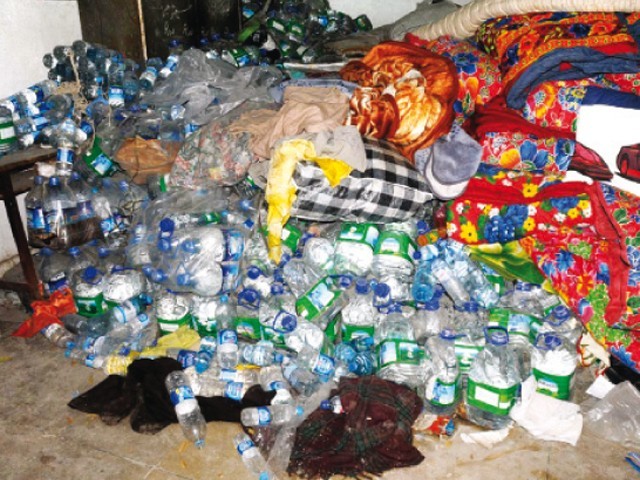 Goods donated for the flood-hit populace were left to rot. PHOTO: WASEEM IMRAN

Relief goods worth millions of rupees collected for flood victims were eaten by rats and insects and later thrown into Nullah Leh. The remaining blankets, warm clothes and tents are yet to be distributed among the flood victims by the Rawalpindi administration.

Food items disposed off by the authority include juice, dry milk, flour and other bakery products. These items were eaten away by rats and insects. Later, residents said the ‘useless’ goods were thrown into the nullah.

The locals demanded a high-level inquiry into the matter.

Saad Khan, a resident of Dhoke Ratta Amral, a nearby area of Nullah Leh, told The Express Tribune that the authorities were reluctant to distribute the flood goods among the ‘genuine victims’. Similarly, Maqbool Ahmad, a resident of Saddar, revealed his fear that the officials were selling the goods, especially blankets and quilts in the ‘landa bazaars’.

The goods were stored near Nullah Leh (drainage canal) and remained there for the past six months. Deny’s Higher Secondary School and the office of the Rawal Town Municipal Administration (TMA) were turned into warehouses for the purpose.

Commissioner Rawalpindi Zahid Saeed, when contacted by The Express Tribune said Rawalpindi was the ‘hub of flood relief activities’. Due to shortage of space, the goods were stored near Nullah Leh, he said. However, he denied the claims of the locals that the items were thrown into the nullah.

The commissioner said more than 200 trucks loaded with relief goods were sent to flood-affected areas and each MNA and MPA of Rawalpindi Division arranged 5 to 10 trucks for the purpose.

Saeed added that Rawalpindi was going to dispatch the relief goods for flood-hit people not only in Rawalpindi Division but also to some areas of Khyber-Pakhtunkhwa, Azad Kashmir and Gilgit-Baltistan. Shifting the blame, he said, “Despite repeated reminders, the political leadership of G-B did not give us intimation to dispatch the relief goods due to which only a few items like flour went to waste.”

To another question, he said during school vacations the city administration turned the schools into warehouses.

A teacher of the Deny’s school told The Express Tribune that students and teachers had also staged a protest against this act. “To date, goods could not be distributed among the victims and the school continues to be a warehouse,” he said.

Siddique Fazal, a student of the school, said the administration had occupied three main classrooms and a hall of the school to store the goods. “The blankets, warm clothes and tents have been carelessly stuffed into the school’s classrooms,” he said. On the other hand, Commissioner Rawalpindi said he had given assurance to the principal of the school that within a few days the school would be cleared of the relief goods.