Kumar's arrest over a rally where anti-India slogan­s were chante­d has led to India's bigges­t studen­t protes­ts in years
By AFP
Published: February 18, 2016
Tweet Email 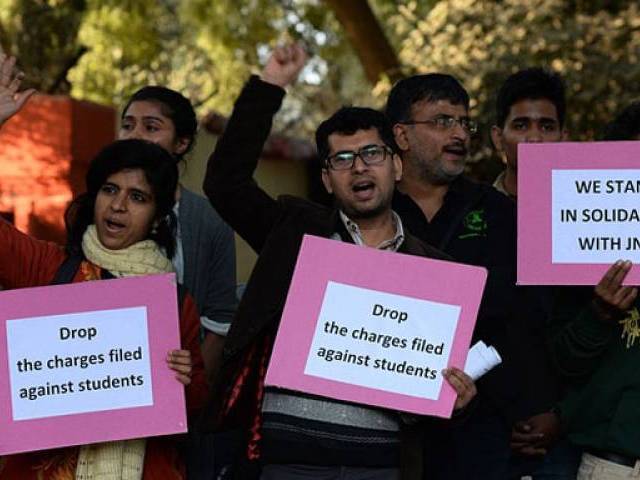 NEW DELHI: India’s highest court said Thursday it was concerned about law and order after a student leader whose arrest for sedition has sparked major protests was attacked, while journalists and lawyers were heckled in court.

The arrest of Kanhaiya Kumar last Friday over a rally at which anti-India slogans were chanted has provoked some of India’s biggest student protests in years amid concern over freedom of speech in the country’s universities.

Protest marches were due to be held in the capital and several other cities on Thursday to demand the release of Kumar, who was attacked on Wednesday by right-wing lawyers as police escorted him into court for a hearing.

Journalists covering the case had stones thrown at them and lawyers who had been sent by the Supreme Court to investigate were heckled, one of whom said there had been an “atmosphere of terror”.

On Thursday the Supreme Court said it was “concerned about the law and order situation arising out of the violence” at the Patiala House court, where violence also broke out an earlier hearing for Kumar on Monday.

The 32-year-old head of the student union at Delhi’s prestigious Jawaharlal Nehru University has been remanded in custody until March 2.

He denies he was among those chanting anti-India slogans at a rally held last week to mark the 2013 hanging of Kashmiri separatist Mohammed Afzal Guru over a deadly 2001 attack on the Indian parliament.

Rights groups including Amnesty International have called for his immediate release, accusing the Hindu nationalist government of using the British-era sedition law to “silence and harass those with divergent opinions”.

The opposition Congress party has accused members of the ruling Hindu nationalist Bharatiya Janata Party (BJP) of orchestrating the violence.

On Thursday its vice-president Rahul Gandhi met India’s President Pranab Mukherjee to express concern, saying the scenes in court were an “affront to the democratic ideals of this country”.

Protests were being held in several cities including Chennai and Hyderabad in the south and Kolkata in the east.

In Delhi thousands of students and supporters were expected to turn out for a rally to press for the dropping of charges against Kumar and other students who the police say chanted anti-India slogans at last week’s rally.

Police are still searching for those students, who have not been named.

Protests against Guru’s execution have regularly been held in Indian-occupied Kashmir, where many believe he was not given a fair trial. Guru always denied plotting the attack, which was carried out by Kashmiri militants.

Sedition charges have been used in the past against supporters of independence for the disputed territory of Kashmir, which is divided between India and Pakistan and claimed in full by both.

Sedition carries a maximum penalty of life imprisonment although convictions are rare.