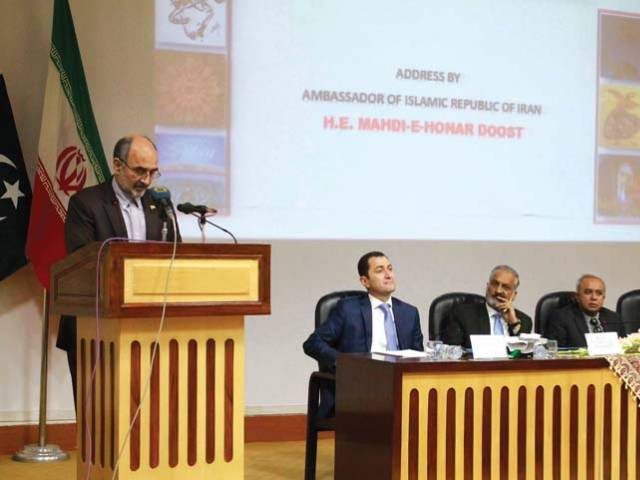 The Iranian Ambassador, Mehdi-i-Honar Doost, addresses inaugural session on “Cultural and lingual commonalities between Iran and Pakistan” at Numl on Wednesday. PHOTO: EXPRESS

ISLAMABAD: Pakistan and Iran have common cultural, lingual, religious and traditional roots which could help the two states understand each other better, participants of a seminar said on Wednesday.

Speaking at the opening ceremony of a two-day seminar, organised by National University of Modern Languages (NUML) and the Iranian embassy, Iranian Ambassador Mehdi Honardoost said that Pakistan and Iran did not just have cultural and lingual similarities, but also shared the same religious, humanitarian and traditional values.

He said that once Persian used to be the official language of this region and even Pakistan’s national poet Allama Iqbal wrote most of his poetry in the Persian language.

Honardoost also mentioned sufi saints in his address, who he credited for promoting the language in the region. He said that such international seminars could play a key role in developing an understanding between the two states.

Major General (retd) Ziauddin Najam, rector of NUML, emphasised on the need of peace and harmony in the Muslim world and said that this was the right time to bring different cultures together. He said that Iqbal’s poetry had reflected the same message.

Dr Ghulam Raza Bhatti, executive director of Higher Education Commission, was the chief guest at the event. He commended NUML and Iranian embassy for organising the seminar.

He hoped that the seminar would highlight the important relationship of Iran and Pakistan.