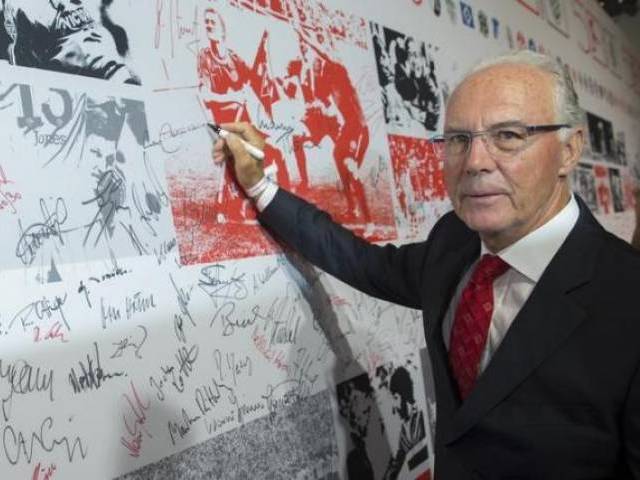 Former player and coach Franz Beckenbauer signs a wall of fame at a gala marking the 50th anniversary of the foundation of the German Bundesliga soccer league, in Berlin August 6, 2013. PHOTO: REUTERS

GENEVA: FIFA’s ethics committee on Wednesday sanctioned German football legend Franz Beckenbauer with a warning and a light fine for failing to cooperate with a probe into the bidding for the 2018 and 2022 World Cups.

The investigation into the controversial decisions to award the two tournaments to Russia (2018) and Qatar (2022) culminated in the now famous 2014 report authored by former US prosecutor Michael Garcia, which FIFA has so far not released, citing procedural reasons.

Beckenbauer “failed to cooperate” with the investigation, “despite repeated requests for his assistance,” an ethics committee statement said.

The information sought from Beckenbauer included “requests to provide information during an in-person interview and in response to written questions presented in both English and German,” the statement added.

Beckenbauer, 70, served on the panel that chose the tournament hosts.

In June 2014, he was suspended for 90 days for his alleged reluctance to cooperate with the Garcia probe, but that suspension was lifted after two weeks.

In October, FIFA judges opened an investigation targeting Beckenbauer, a former FIFA executive committee member, but did not disclose the nature of the probe.

The German national led his country’s successful bid for the 2006 World Cup, which has been engulfed by claims that a $7.2 million payment to FIFA was used to purchase the votes of four members of FIFA’s executive committee in 2000 — days before Germany’s bid was narrowly approved.

The ethics committee, however, said its investigation of Beckenbauer “did not look into the matters related to the awarding of the 2006 FIFA World Cup to Germany.”

The statement from the tribunal noted that Beckenbauer has “subsequently demonstrated a willingness to cooperate.”

Garcia quit FIFA after compiling his report, claiming that world football’s governing body released an erroneous summary of his findings that sought to clear Russia and Qatar of wrongdoing.