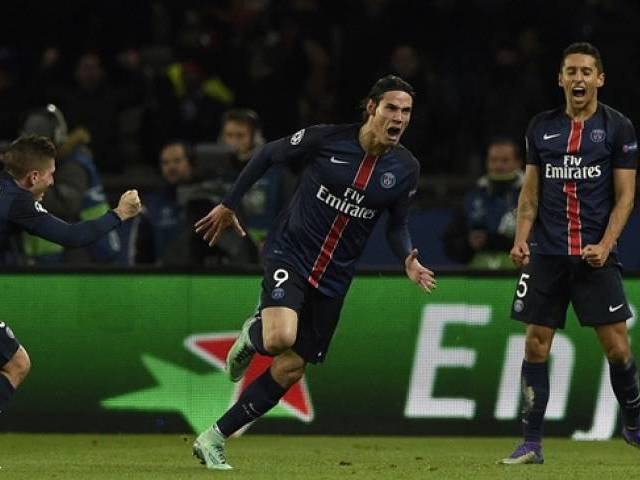 PARIS: The much-maligned Edinson Cavani came off the bench to score the winner as Paris Saint-Germain edged Chelsea 2-1 in the first leg of their Champions League last-16 tie on Tuesday.

Cavani beat the excellent Thibaut Courtois in the 78th minute at the Parc des Princes, just four minutes after coming on as a substitute, to give the French champions the advantage ahead of the second leg on March 9.

Zlatan Ibrahimovic had earlier given Paris the lead from a deflected free-kick only for a rare John Obi Mikel goal on the stroke of half-time to bring Chelsea level.

PSG’s win in what was a high-quality encounter means they have still lost just once — to Real Madrid — in 40 games this season, while it was a first defeat for Chelsea since Guus Hiddink replaced the sacked Jose Mourinho in December.

“It was a great game. A Chelsea team that people said was in difficulty showed that they are getting their colour back as well as the discipline that allows them to defend well and break with incredible pace,” PSG coach Laurent Blanc told beIN Sports.

“We expected a difficult match. It will be difficult at Stamford Bridge too, but I think the Chelsea players will be saying the same thing.”

Hiddink said: “Of course a defeat is never a good or nice feeling, but you have to consider it’s a two-leg game and scoring away is always important.

With John Terry absent, Chelsea’s reshuffled defence featured skipper for the night Branislav Ivanovic in the middle alongside Gary Cahill with Cesar Azpilicueta at right-back and Baba Rahman on the other side.

Marquinhos started at right-back for PSG after Serge Aurier was ruled out by the club for disciplinary reasons, while Marco Verratti returned to the starting line-up after a month of fitness struggles.

With the Italian midfielder pulling the strings from the off, Paris started strongly, asphyxiating Chelsea with their high press.

Such a bright opening led to chances, with Verratti seeing his shot from 20 yards beaten away by Courtois and Lucas hitting one narrowly wide inside the first five minutes.

Ibrahimovic sent a free-kick off target as Chelsea weathered the early storm and gradually grew into the game.

They should have opened the scoring, too, but when Baba Rahman’s inviting cross from the left found Diego Costa, his header from point-blank range was instinctively palmed onto the bar and over by Kevin Trapp in the home goal.

That was a key moment as Paris went on to open the scoring in the 39th minute. Mikel was booked for halting a rampaging run by Lucas at the gates of the penalty box and Ibrahimovic stepped up to smash the resulting free-kick into the net, with the aid of a deflection off the wall, for his 28th goal of the season.

However, the French champions were unable to hold onto their lead until the interval as Chelsea equalised with the final kick of the first half.

Willian’s delivery from the right was not cut out at the near post and Mikel gleefully prodded home from six yards.

It could have been worse for the home side as Trapp was forced to make himself big and save from Costa four minutes into the second half following a counterattack led by Willian.

A long spell of Paris domination followed, but they were thwarted several times in their attempts to find a winner as Courtois produced an array of outstanding saves.

The Belgian tipped over a long-range thumper by Angel Di Maria and denied Lucas after the Brazilian had played a one-two with Ibrahimovic and accelerated towards the area.

He then stretched his huge frame across goal to turn behind a net-bound Di Maria free-kick, but there was nothing he could do to stop Cavani’s winner.

The Uruguayan, who has lost his place as a regular starter in the PSG side due to a poor start to 2016, played the role of super sub as he kept his cool to meet Di Maria’s flighted ball into the box with a low first-time finish.

We don’t need to be friends to play well together, says Ronaldo