It was found by resear­chers from the zoolog­y depart­ment of the Univer­sity of Punjab during an expedi­tion
By AFP
Published: February 16, 2016
Tweet Email 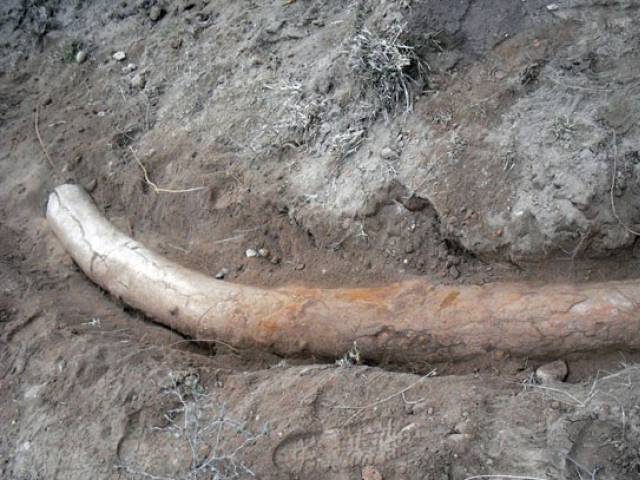 This handout photograph taken on January 17, 2016 and released by the University of Punjab shows a stegodon tusk at the discovery site at Padri village in Jhelum district. PHOTO: AFP

LAHORE: A team of Pakistani researchers claims to have unearthed a 1.1 million-year-old stegodon tusk in Punjab province, potentially shedding new light on the mammal’s evolutionary journey.

Stegodonts, distant cousins of modern elephants, are thought to have been present on earth from around 11 million years ago until the late Pleistocene period, which lasted until the end of the last Ice Age around 11,700 years ago.

The tusk measures some eight feet in length and is around eight inches in diameter, making it the the largest ever discovered in the country, according to the team.

It was found by researchers from the zoology department of the University of Punjab during an expedition in the Padri village of Jhelum district, said Khurram Shahzad, a spokesperson for the university.

Professor Muhammad Akhtar, who led the research trip, told AFP: “This discovery adds to our knowledge about the evolution of the stegodon, particularly in this region.

“It also sheds light on what the environment was like at the time of the animal’s life.”

Dr Gerrit Van Den Bergh, a paleontologist at the University of Wollongong in Australia who has done extensive research on the ancient mammals including in Pakistan, said, “If you have a complete tusk, that’s quite special — they are quite rare.”

He cautioned however that further verification, including of the dating, would be required.

Akhtar said the fossil belonged to the late Pleistocene period and its age was determined using a uranium-lead radioactive dating technique.

Stegodonts were known for their long, nearly straight tusks and low-crowned teeth with peaked ridges.

This indicated they were browsers or mixed feeders in a forested environment, in contrast to the high-crowned plated molars of mammoths and elephants which allowed them to graze.

They were strong swimmers and are thought to have originated in Africa but to have quickly spread to Asia, where most remains have been found.

“Around 1.2 million years ago they were still thriving,” said Van Den Bergh. “They are mostly an Asian species but remains have been found further afield. Recently a molar fragment was discovered in Greece.”

He added that the species’ extinction coincided with the emergence of modern humans, though it was difficult to say with certainty that men hunted stegodonts.