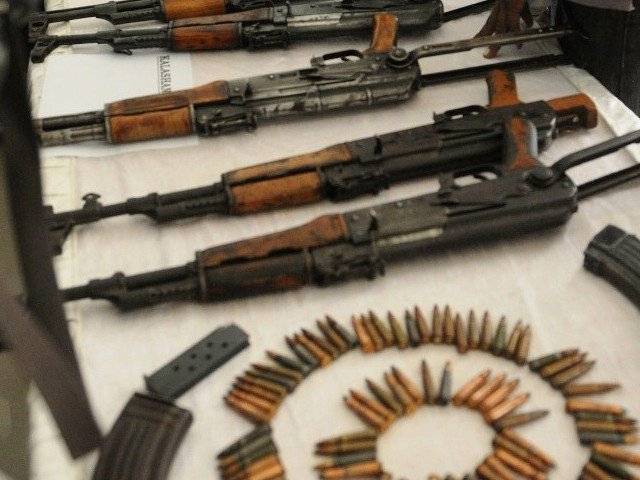 Police seized huge caches of arms being transported to Silakot and Dera Ghazi Khan districts on Monday. An SHO and a terrorism suspect died in a shootout at a picket in Dera Ghazi Khan.

Dera Ghazi Khan Saddar police stopped a truck (with the licence number TKB 728) at a picket in Kot Chutta early morning on Monday.  Police said that they had received a tip-off about a weapons smuggling bid on the Indus Highway late at night on Sunday. They set up a picket in Kot Chutta. When they tried to stop the truck, the men riding it started shooting at the police.

A shootout ensued and one of the men in the truck, later identified as Muhammad Rizwan, was killed. Saddar SHO Imran Nawaz Barohi was injured in the shootout. Police said they took him to the Dera Ghazi Khan district headquarters hospital but he passed away on the way there.

Police said Rizwan’s accomplices managed to flee into the dark, but they seized the truck and found a large cache of weapons. They said the truck had carried around 5,000 bullets for G-3 assault rifles, 900 bullets for Kalashnikov rifles, 44 hand grenades and two RPG shells among other arms.

Funeral prayers for SHO Barohi were offered at the Police Lines on Monday morning and he was given a guard of honour.

The body was then sent to his native town Taunsa Sharif. A large number of policemen including the RPO and the DPO attended the funeral prayers.

Police said they had registered cases against the suspects under various sections pertaining to terrorism, attempted murder and carrying explosives. Police said they were investigating the case.

In Sargodha, district police said they had foiled a terror bid and had seized a sizeable quantity of weapons.

They arrested the driver and his companion. Both of them hailed from Khyber Pakhtunkhwa.

Police said that Akhtar Nawaz and Fazal Karim had confessed that they were transporting the weapons to Sargodha.

Police said they had registered a case against them on terrorism charges and were investigating the case.

Let there be light: 132KV grid station inaugurated in Mankot