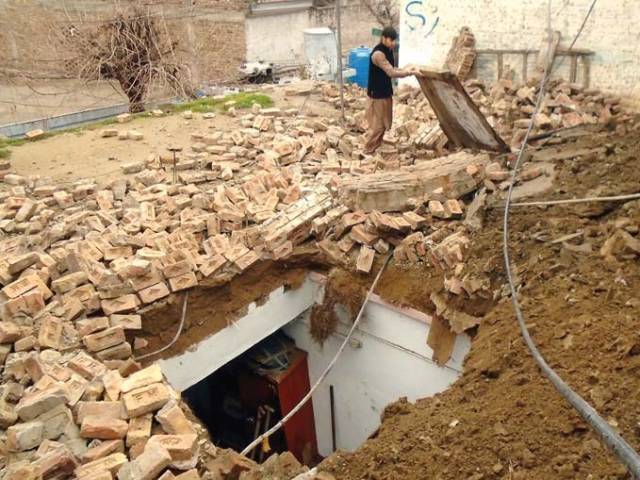 Debris of the wall of a house that collapse in Lower Dir. PHOTO: INP

PESHAWAR / DIR / ABBOTTABAD / CHITRAL: At least four more people were reported dead on Thursday in rain-related incidents, including two in Lower Dir and two in the provincial capital. Two females in Peshawar, and two men in Chitral were reported dead due to heavy rainfall on Wednesday.

The Pakistan Meteorological Department (PMD) predicted snow and rain will continue which may cause landslides in Malakand, Hazara Divisions, Kashmir and Gilgit-Baltistan. It requested locals to take “necessary measures” to avoid loss of life and damage to property.

Two sisters were killed when the wall of their house collapsed due to heavy rainfall in Timergara. Malik Ali said his two daughters, aged 15 and 20, were sleeping in a room when the wall fell due to heavy rain. Locals gathered to rescue the girls, but they died as a heavy piece of debris fell on them. Later, the two were laid to rest in their native graveyard.

According to Provincial Disaster Management Authority, one child and one man also died in rain-related incidents in Peshawar.

Heavy snowfall was reported in Mansehra and Abbottabad districts which blocked KKH and other routes. The PDMA spokesperson has directed the deputy commissioner of Abbottabad to send heavy machinery to remove snow and clear routes.

Heavy snowfall and rain crippled routine in Hazara Division, compelling people to remain indoors on Thursday. Business activities remained suspended in many areas, while tourists were also not allowed to visit areas like Galiyat and Kaghan.

Officials informed The Express Tribune roads leading to many areas were blocked due to the snow, while transport remained off the road. They confirmed it started snowing and raining Wednesday evening and continued till Thursday in Hazara Division.

Main Abbottabad-Murree Road, including link roads and Ayubia Road, was completely blocked. Plains in Havelian tehsil also received five inches of snow, while one foot of snow was recorded in the hilly areas.

The Karakoram Highway was blocked from Shinkiari in Mansehra to Battagram city as authorities failed to clear the road. This resulted in the suspension of traffic on the main artery leading to Gilgit-Baltistan and China border.

According to locals, snow and rain have caused landslides in Torghar district, but there were no casualties.

When approached, Galiyat Development Authority Director Raza Ali Habib told The Express Tribune, “The roads in Galiyat valley are blanketed and it is not technically feasible to clear the roads when snow is falling in the area.”