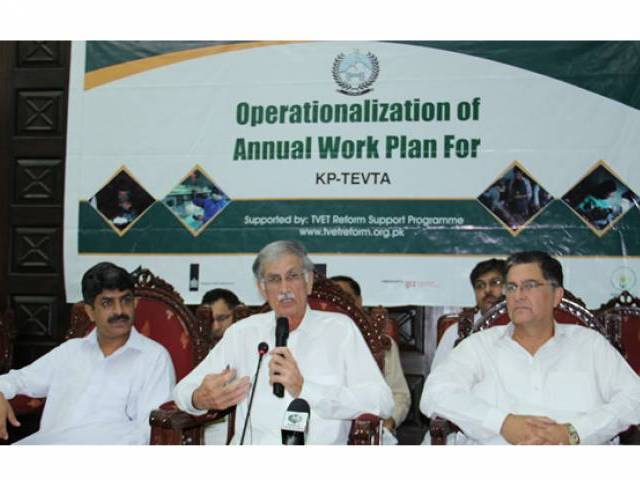 Senator Nauman Wazir might have resigned as the vice chairman of the Khyber-Pakthunkhwa Technical Education and Vocational Training Agency (TEVTA) a day ago. However, his initial appointment was in contradict ion of Article 63 of the Constitution of Pakistan. And it seemed the K-P government has no qualms about it.

Wazir, a senator from PTI, was appointed by the industries, commerce and technical education department on June 5, 2015 through a notification. Official documents, copies of which are available with The Express Tribune, showed the provincial law department had objected over the proposal to appoint Wazir when asked for its views on the summary. It had asked the industries department to reconsider the proposal.

The summary documents also showed there was no vice chairman slot in the agency under the TEVTA Act and the chief minister was its chairman. Later on, a slot was created by inserting Subsection 4 into Section 5 of the act.

To fill the post, the department sent a summary proposing the position of vice chairman be advertised and a suitable candidate found through a search and scrutiny committee comprising special assistant to chief minister on technical education, secretary industries and vice chancellor of the University of Engineering and Technology Peshawar. It was decided a panel of suitable candidates would be proposed for the position.

However, the post was not advertised and documents stated the department moved a summary on the orders of the chief minister with a four-name panel for the slot. Among those names were Wazir, Adil Rauf, Abdullah Shah and Muhammad Javed.

The chief secretary and law department were asked for their views on the summary and both raised objections as besides Wazir, the CVs of the other three candidates were not provided with the summary.

The law department, in its response on May 20, 2015, called the summary “deficient” and also pointed towards Clause 1 of Article 63 of the Constitution under which Wazir may be disqualified as he was also serving as a senator. It asked the industries department to reconsider the proposal.

The chief secretary, in his views on May 21, 2015, said “Senator Nauman Wazir is likely to be disqualified as a senator if appointed vice-chairman.” He added the CVs of the other three people had not been placed in the file.

“The CM House was pressing for the summary of Wazir’s appointment,” said a senior official of the department, requesting anonymity.

The official, who remained closely familiar with the developments, said TEVTA nominated Wazir for the slot in its meeting on May 26, 2015, and on June 5, 2015. The principal secretary to the CM asked the Industries department to issue the notification.  The department notification stated, “His appointment as vice chairman will be without any remuneration and he will not be having an office of profit in the government or in the service of government.”

The official added, “We were under pressure although the act has no provisions under which the board of directors can appoint a vice chairman for TEVTA. However, the CM House sent the letter for Wazir’s notification.”

The chief minister delegated his powers as chairman of TEVTA to Qaumi Watan Party’s Arshad Ali Umarzai, the special assistant to the CM on technical education.

“The Managing Director of TEVTA is now stuck between two bosses—the chairman and vice chairman— as both are active in agency (TEVTA) matters. In fact, he is confused about whom to report to,” the official said.

When asked about the matter, Wazir said he resigned from the slot on Wednesday due to excessive political interference. “I have sent my resignation to the chief minister,” he added. “I joined TEVTA so I could work for the country and for my people; those who are against it are actually enemies of the country.” He accused Umarzai of using political interference in TEVTA.