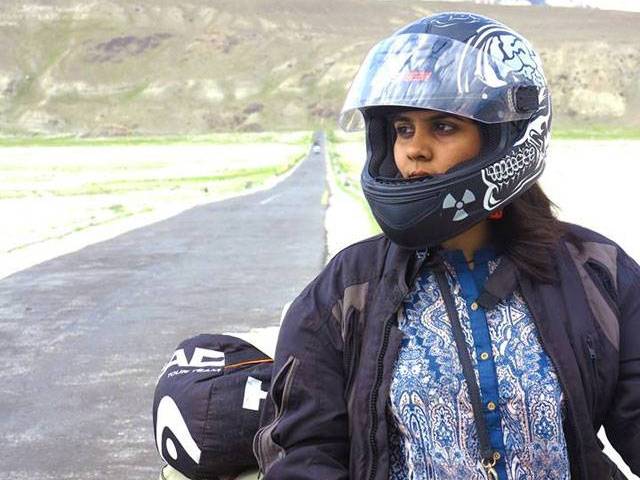 Helmet on; buckled up in motorcycle gear, people often assumed she was a boy. But if by chance they figured out she was a girl, she rode off before even giving them a chance to react.

Twenty-one-year-old Zenith Irfan is the first female motorcyclist to travel to Kashmir all by herself, a trip she describes as “liberating, empowering and a blessing.”

But the journey began eight years ago, when she learnt of her late father’s dream of travelling the world on a motorbike.

“When I was 12, we were going through some family pictures when my mother told me about my father’s aspiration to travel the world on his motorcycle,” Zenith told The Express Tribune. “He passed away at age 34, leaving a trail of unrealised dreams,” she said.

In 2013, Zenith took it upon herself to learn how to ride a motorbike from her brother, which would enable her to “pursue this dream and leave a legacy”. On her solo trip, she was determined to crush any stereotypes of women travelling alone in Pakistan. “We live in a traditionally patriarchal society; a society where the concept of women empowerment is relatively new.” She says it might take time for Pakistan to accept women on bikes as something normal; however, she adds, this should not stop women from exercising their right to do so freely.

For Zenith, travelling alone wasn’t a top concern. She points out that throughout her journey there was not a moment when she felt scared. “We have already started climbing the progressive ladder,” she says, hoping she has set an example for women around the world to push themselves beyond the boundaries of a patriarchic society by replacing fear with a drive to succeed.

What she was concerned was that many truck drivers tend to fall asleep at the wheel after driving all day, and her biggest fear was crashing into a truck. However, her faith in fate kept her focused on her goal and not let fear take over her. Apart from feeling a sense of liberation, she said the experience opened her eyes to the beauty of Pakistan. “I never knew how beautiful my own country was and how friendly people were over here. I was in awe”. Her personal favorites were the beautiful Misgar, Shigar and Hunza.

Zenith also had the opportunity to meet and speak with people from across the country during her travels. Apart from her solo trip, she also traveled to Khunjerab Pass with her brother and friends. She recalled meeting a gentleman, during her earlier travels with her brother and friends, who shared his inspiring story with her. “It was dark, late at night and he was telling us about his adventures from Khunjerab to Karachi. It turned out his entire trip was on foot. He said he did in the short span of 70 days, and that too for world peace.”

The only unfortunate incident she could remember was the frightening ordeal she had to face when her brakes failed coming down the mountains from Saif-Ul-Mulook. As a result, she had to glide down the motorcycle with the help of the gears that created friction with the mud.

Currently majoring in Marketing and Finance at Lahore School of Economics, Zenith revealed she has a lot of new exciting ideas in mind for the future, and will disclose them when things are structurally laid out.

You can follow her on her personal blog, Zenith Irfan: 1 Girl 2 Wheels