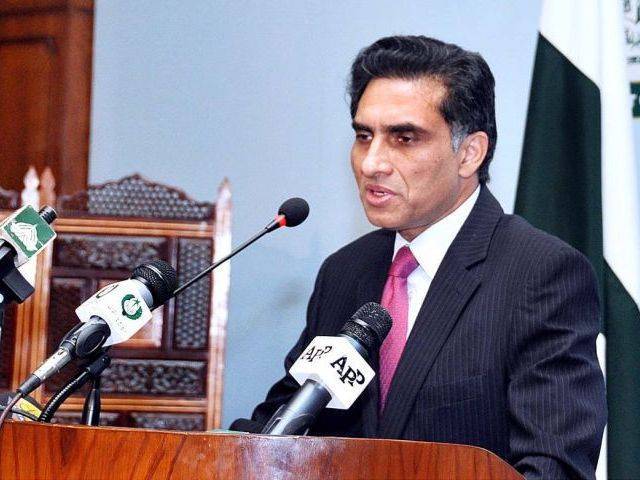 A parliamentary panel advised seemingly ambivalent government on Tuesday against jeopardising national interest while taking a decision about Pakistan’s role in a 34-nation alliance to counter terrorism.

Though the MPs have advised the government in the National Assembly, Senate and other available forums, Senate Standing committee on Foreign Affairs voiced concerns after learning that the government had not taken any decision about its role as yet.

While briefing the committee on the alliance, foreign secretary Aizaz Ahmed Chaudhry had stated that the coalition’s facets of cooperation will be decided in due course through consultative meetings between the 34 countries.

About joining the coalition, he said that Pakistan had consistently supported all regional and international efforts to combat militancy, extremism and terrorism and it was in this context we welcomed the formation of the 34-nation alliance.

Be cautious or Pakistan will suffer, observed Karim Ahmed Khawaja of PPP as he referred to past decisions and the spillover of terrorism. Pakistan should have no involvement in Syrian civil war, he added.

Maulana Attaur Rehman of JUI-F referred to religious inclinations of Pakistanis and warned against taking sides with any of the country. He said that doing so would ignite the Shia-Sunni tensions in Pakistan.

Farhatullah Babar of PPP asked the secretary to make a categorical statement with regard to Pakistan?s role. Shibli Faraz of PTI said, ?though the role has not been defined, we do not want to be entangled in the military alliance.?

However, officials sitting on the other side of the table could not make a categorical statement in this regard.

The concern of the inquisitive senators on foreign secretary’s statement prompted Advisor to PM on Foreign Affairs, Sartaj Aziz, to explain that we cannot take policy decisions on the basis of the media reports [as referred by committee].

The government is ambivalent, observed Senator Mushahid Hussain Syed from the PML-Q while talking to The Express Tribune after the meeting. Syed had also sought answers about Pakistan’s joining of Syrian civil war.

The foreign secretary briefed the committee about the recent developments, saying that a direct meeting of the Afghan Taliban with the Afghan government was likely to take place by the end of February. The next meeting will [of four countries] take place on February 23 in Kabul.

He said that the starting point for our policy is that Pakistan wants peace in Afghanistan, and we are moving forward with sincerity.

Regarding meeting of Prime Minister Nawaz Sharif and US Vice President Joe Biden at Davos, Chaudhry said that sequencing of the reconciliation process was discussed during the meeting.