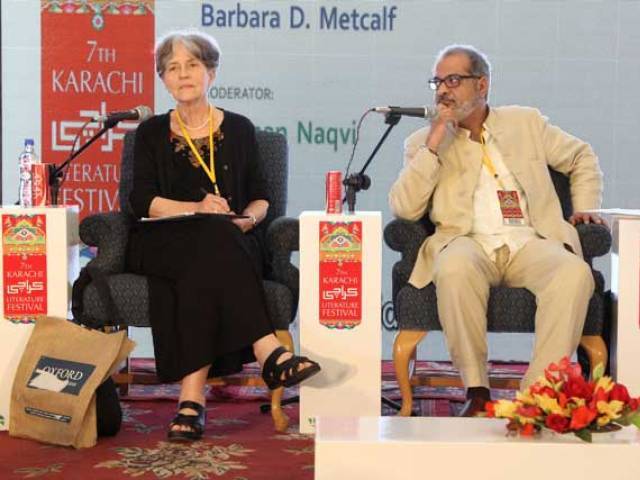 We need good history. Unless we have good history, we will continue to have myths, said historian Barbara Daly Metcalf. An example of such a myth is the notion that there was a united Muslim community in the subcontinent, she claimed. The history reveals that many Muslim invaders did attack other Muslims, the communities were focused on world interests and territorial gains, she added.

Metcalf, a specialist in the history of South Asia especially the colonial period, was speaking on the second day of the 7th Karachi Literature Festival at a session, titled ‘Writing History’. The session was moderated by Habib University school of arts, humanities and social sciences dean Dr Nauman Naqvi.

Defining what she means by ‘good history’, she said that we need to challenge the deeply embedded notions that are a product of the colonial era. For instance, labeling the Indian traditions as ‘backward’ and believing that British brought a ‘positive change’ in the subcontinent

To progress, we have to move beyond these discourses, she pointed out.

Speaking about the Deoband movement, Metcalf highlighted the beginnings of the movement, and its trajectory that leads to the creation of a secular state (of sorts) in the subcontinent.

Deoband movement developed as a reaction to British colonialism. After the 1857 mutiny, the dominant rhetoric was that nobody was going to challenge the British Raj. During this period, the roles of state and native religion were bifurcated, she said.

The native religion devoted itself to family law, ritual behaviour and ethics. The religious figures of authority decided that they did not want to take up role in politics, she explained. “In this period, we see the formation of a secular state of sorts.”

Speaking about her anthology titled Moral Conduct and Authority: The Place of Adab in South Asian Islam, she said that it highlights the extent to which Muslim moral and ethical practices changed with time.

The text particularly focuses on the moral cultivation of Muslim girls and women, she said. It basically allow the young girls to engage with their bifurcated self, hold conversation with her moral self and her undisciplined self, she claimed. “[It is] fascinating to see the expectations of how a girl can become a good woman.”