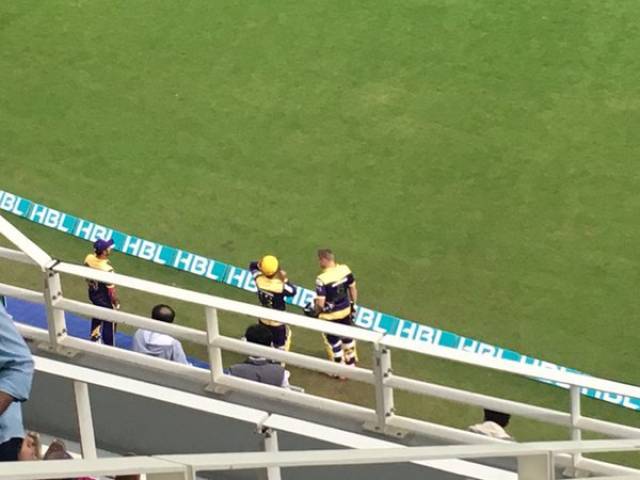 Luke Wright played a magnificent unbeaten innings of 86 runs. He hit 11 boundaries and four maximums in the process.

Imran Khalid was the only successful bowler for Islamabad with two wickets for 20 runs in his four overs.

Quetta sent Islamabad to bat first after winning the toss and Nawaz bagged four wickets in each of his four overs to bring Misbahul Haq-led team down.

Misbah (41) together with Andre Russell (35), then, played useful knocks to push the total to decency.

Man of the match award goes to Muhammad Nawaz for his all-round performance. “I am very happy. Pressure was there but Zulfiqar helped me. I am here to prove myself as an all-rounder.”

Misbah: “We started poorly with the bat and the ball. We kept losing wickets. Quetta applied themselves better than us. Pitches support the spinner, we need to add spinners.”

Sarfraz: “We won a good toss. The win is very important. Credit goes to the bowlers. Luke was exceptional, he pushed Islamabad out of the match. KP supported me very much.”

SIX by Luke over midwicket and a FOUR on the last ball to end the match with an eight-wicket win.

Five runs off the over

Watson in for his second over.

Samuel Badree is back!

Shane Watson has come on to bowl now!

SIX! You can’t bowl full-toss to Luke with that form on.

Imran Khalid in for his last over.

Muhammad Irfan is back! Muhammad Nawaz and Luke Wright face.

LBW! Pietersen caught in front of the stumps. He departs for a meagre eight runs.

FIFTY up for Luke Wright.

Rumman Raees continues into his second over.

Just four runs off the over.

No boundaries and only four runs off the over.

OUT! Shehzad send the leading edge back to the bowler. Islamabad strike. Kevin Pietersen walks in!

FOUR! Full-toss on legs and Luke earns yet another boundary. This time towards long leg.

FOUR! Luke making full use of the powerplay.

FOUR! Short and pulled by Luke towards midwicket. Quetta steaming towards the target.

Samuel Badree to bowl the second over. FOURx3! Wright starts the carnage, Shehzad hits a brace!

Luke Wright and Ahmed Shehzad open for Quetta. Tall left-armer Muhammad Irfan to open the bowling. Goes for six runs in the over courtesy a boundary by Wright.

FOUR! The match ends on a good note. Quetta will have to put in effort to chase this target. Islamabad don’t have a big target but it is enough to defend on this wicket.

Even the great Andre Russell hasn’t got an answer to Gul-dozer’s yorker!

Umar Gul to bowl the last over.

OUT! Misbah pulls and is caught at short fine leg. Gul takes the catch.

FOUR! Another one from Misbah. This time its midwicket.

Anwar Ali now with penultimate over.

Short ball and missed by Russell. Heavy thumping for Gul!

Dubai residents thought they heard a thunderstorm, but it was only the sound of @Russell12A's bat! #DhamakaydarHits pic.twitter.com/wUrYuog7AT

FOUR! Russell again! Full and Russell digs it out and beats the fielder at extra cover.

FOUR! Full and hit hard towards midwicket by Russell.

So the seamers are back. Umar Gul steams in!

SIX! Andre Russell with a big front-foot smash over long-on.

Muhammad Nabi into his fourth over.

Muhammad Nawaz continues into his last over. Turn of fortunes for this lad!

DROPPED! Imran Khalid tries to go over the extra cover boundary but finds the fielder who spills a dolly; Akbarur Rehman is the culprit!

Muhammad Nabi to bowl his third over now. Sarfraz is not calling on his seamers.

Four runs and a wicket off the over. Nawaz has three scalps from his three overs.

OUT! Babar Azam comes out of the crease, edges it into the air and is caught at short fine leg.

Muhammad Nawaz into his third over.

Four runs from Akbarur Rehman’s over.

The go-to man in crises, Misbahul Haq, is here to join Babar Azam.

BOWLED! Sam Billings goes for a reverse sweep and misses the ball.

Akbarur Rehman gives only four in his over. Sarfraz playing smart here. Dealing with spinners.

Just three runs and a wicket off the over.

OUT! Luke Wright bag a stunner square on off side. Umar Amin departs. Quetta in control right now!

Muhammad Nabi continues and Watson is joined by another left-hand batsman Umar Amin.

OUT! Swept and caught by Nabi inside the circle. Zulfiqar takes the first scalp of the PSL.

SIX! Steps out and smashes it over long-on. Sharjeel registers his name on the first six of the PSL.

Zulfiqar Babar into his second over. Sharjeel Khan faces.

Two runs off the over.

Two runs off the over.

FOUR! First boundary of the PSL comes off Watson’s bat. Short and punched towards leg.

Five runs off the over. No boundary yet in the opening match of the PSL.

Spin from the other end, its the left-armer Zulfiqar Babar.

The PSL kicksoff with a maiden by Anwar Ali to Shane Watson.

Anwar Ali to bowl the first ball of the PSL to Shane Watson. And it is a dot!

Quetta captain, Sarfraz Ahmed: We will bowl first and use the dew to our advantage.

Islamabad captain, Misbahul Haq: We want to set a good total. Shane Watson is in good form. The opening ceremony was tremendous. We couldn’t have expected better.