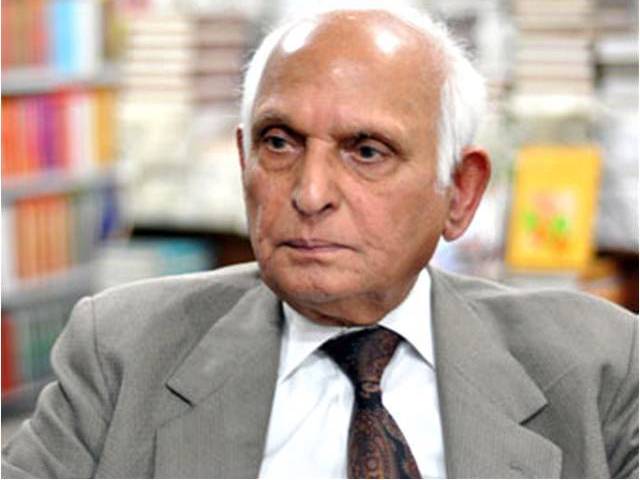 When some people depart, they leave behind such a deep void that one cannot help but imagine how it could ever be filled. Intizar Hussain’s departure is one such for Pakistan. His death on February 2 is not only a loss for Urdu literature, language and the art of storytelling, it is also a loss for our society at large that desperately needs intellectuals of the calibre of Intizar Husain. In his death, we grieve the passing away of arguably our greatest storyteller, who in his writings and by his mere presence reminded us that our society has still not lost everything, that there are still people left who are markers of our culture, that there are spaces for literary conversations, that violence and extremism has not yet taken everything away from us.

Intizar Hussain enjoyed a prolific literary career and continued to write literary notes for Dawn and columns for Daily Express until recently. Even at an advanced age, he could be seen in regular attendance at literary festivals and gatherings, and sessions where he was on the panel would be packed, with both the young and old eager to hear his views in his typical soft-spoken and kind manner of speech. Remembrance, nostalgia, Partition and migration were common themes in his writings, which gave a voice to the human suffering and trauma of migration. Among his most well-known works are Basti, Tazkira, Aagay Samander Hai, Hindustan Se Aakhri Khat, Shehr-e-Afsos and Janam Kahanian. His works have been recognised both at home and abroad and he was a recipient of Pakistan’s third-highest civilian award, the Sitara-e-Imtiaz. In 2013, he was among the 10 finalists for the Man Booker International Prize for fiction and the first Urdu writer nominated for this prestigious award. The year after, he was given the French Ordre des Arts et des Lettres award for his achievements. Through his writings, columns, and his presence alone, Intizar Hussain made the difficult realities of our society more bearable and certainly less suffocating. His absence will be deeply felt for many years to come.