Stars shine as PSL kicks off in Dubai

Stars shine as PSL kicks off in Dubai 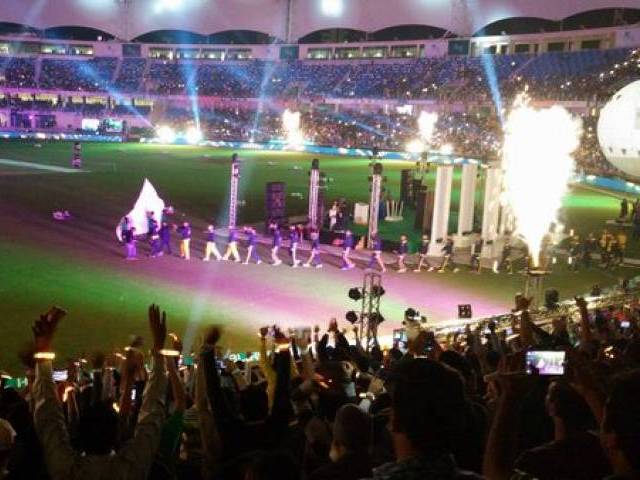 The Pakistan Super League (PSL) is all set to rock the world of lucrative T20 leagues. With 69 local and 29 foreign stars, the five-team, 24-match league will be held from February 4 to February 23 at two UAE stadiums in Sharjah and Dubai.

With the legendary Wasim Akram and Ramiz Raja as brand ambassadors, the PSL is being touted as Pakistan’s much needed opportunity to resurface on the international cricket scene in the limited overs formats.

“We are here to entertain but most importantly we are here to share our experience. We have only three to four years left but we have youngsters with us who have a lot of time to learn and play.”

And the fireworks start…

The showstopper, Ali Zafar, is here!

This is how a ‘rockstar’ makes an entry.

Who can stop Gayle from stealing the show?

Sean Paul on the floor…

“Its a very happy day. A lot of hardwork has gone into making this dream a reality. I want to thank everyone who helped us convert this dream into a reality. I want to thank PCB chairman Shaharyar Khan for his help. Franchises, sponsors, media, players and our nation, everyone has been a part of the process. I am thankful to everyone. World wants to see cricket. Pakistanis are passionate about the game as well. We are sending a message that we can play cricket and we can help other play cricket. In PSL, whether a team or wins or loses, in the end Pakistan will win. I promise to bring at least one or two matches in Pakistan in the next edition. And in the third year, we will come to Pakistan completely.”

He says HBL is delighted to be a part of PSL. “HBL has been supporting cricket for a long time now. I’ll take this opportunity to congratulate PCB for this event.”

She says she likes Imran Khan and Shahid Afridi.

Captains arrive in the stadium

Sanam Saeed and Mohib Mirza for you!

The countdown to start the PSL

The national anthem of Pakistan being played in the UAE