Syria is home to the defini­ng confli­ct of our age and for that reason, the talks are vital to all
By Editorial
Published: February 2, 2016
Tweet Email 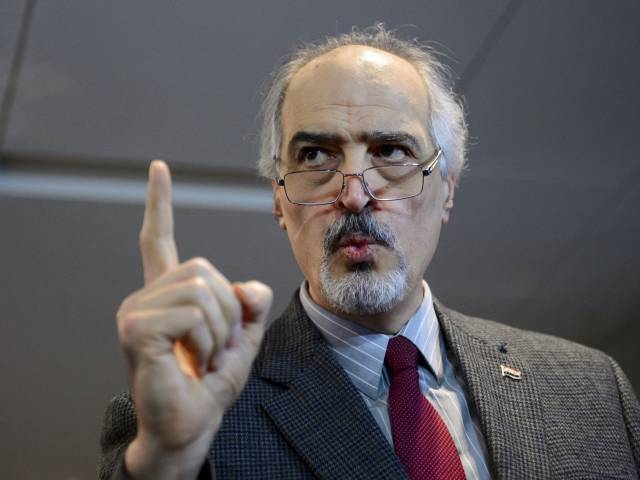 Syrian ambassador to the UN and head of the government delegation Bashar al-Jaafari gestures as he holds a press conference during the Syria peace talks in Geneva on January 31, 2016. PHOTO: AFP

Geneva is the venue for the first substantive talks between several — but not all — of the warring sides in Syria. The talks that started on February 1 have taken UN officials six months to set up, they are proximity talks rather than face-to-face, and nobody is predicting anything other than a very long haul, if indeed they get past this initial phase of meeting and greeting. Both the Syrian government and the opposition are present, the latter having decided to attend at the last minute. The opposition come with conditions in hand — an end to the air strikes, the lifting of deadly sieges that are bringing populations close to starvation and the release of political prisoners. There is no expectation that any of these demands is going to be met.

The situation would appear to be intractable, but the mere fact that the talks are taking place at all is an indication that it is not. The pressures on all sides are immense, and perhaps the pivotal factor in bringing the combatants to the table, if distantly, is the rise and rise of the Islamic State (IS) in the region. The IS is emerging as a common enemy, recognised by most but not all sides as both catalytic and cathartic. For the first time, there is a self-sustaining terrorist group that holds and administers substantial territories, imposes taxation, controls significant oil revenues, is well armed and trained and presents an existential threat to almost every state contiguous with its ill-defined borders. The Syrian conflict has spread far and wide, and the outflow of refugees and migrants is close to bringing down one of the pillars of the European Union — the Schengen Agreement. European self-interests, as well as the interests of Russia keen to preserve its strategic naval assets are in play. Iran, Iraq, Turkey and Jordan, which is sending up distress signals such is the refugee burden it now carries, are present in the background. Syria is home to the defining conflict of our age and for that reason the talks are vital to all, not only those directly affected.