Is this 7-feet-tall Great Dane the world's tallest dog?

Is this 7-feet-tall Great Dane the world's tallest dog?

Standi­ng seven feet tall on his hind legs, Rocko, is conten­ding for a place in the Guinne­ss Book of Record­s
By News Desk
Published: January 30, 2016
Tweet Email 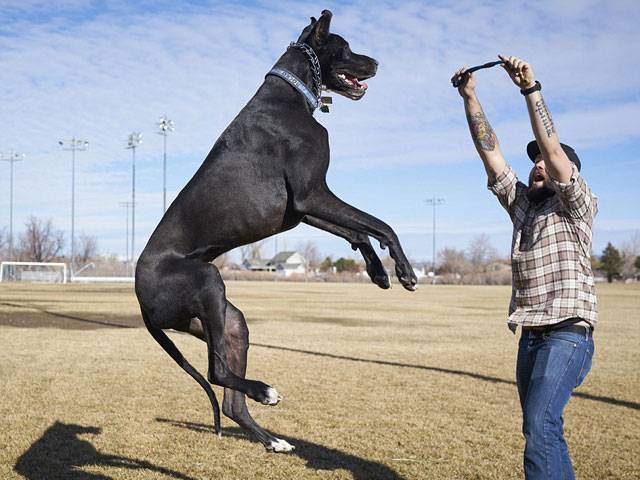 Standing seven feet tall on his hind legs and measuring 40 inches from paw to shoulder, Rocko, a Great Dane is contending for a place in the Guinness Book of Records as the ‘World’s Tallest Living Dog.’

The Great Dane who weighs 167 pounds and is almost the size of a pony belongs to Nick Helms and Jessica Williams from Reno, Nevada in the United States. “We had no idea he was going to be this freakishly large, he was bigger than his sisters at eight weeks but we knew that males were usually bigger so we thought it was normal,” Jessica said while speaking to the Daily Mail.

Comparing Rocko to her best friend’s Danes, Jessica added, “One of their males is larger as well and Rocko surpassed him quickly so we were like..We have a giant freak on our hands.”

The couple bought Rocko from a local breeder two years ago because Jessica had been ‘obsessed’ with the breed for years.

Now the couple is hopeful that Rocko, will be awarded the title of the World’s Tallest Living Dog. “It’s just for fun,” she said.

“Just to see. Because ever since he was younger everyone has always said how tall he is – even for a Dane. We thought it would be fun to try it out.”

The world’s tallest dog from Otsego, Michigan passed away in 2014, according to the Guinness World Records and measured 44 inches from paw to shoulder and was the same size as an average donkey. While Nick and Jessica wait to hear back from Guinness, they’re keeping Rocko healthy who continues to grow.

“He’s still growing at a proper rate,” said Nick. “And he’s really healthy with a good heart and good stomach. So who knows when he’ll stop growing,” he added.

Fiat used by Pope during US visit sold at auction for $82,000