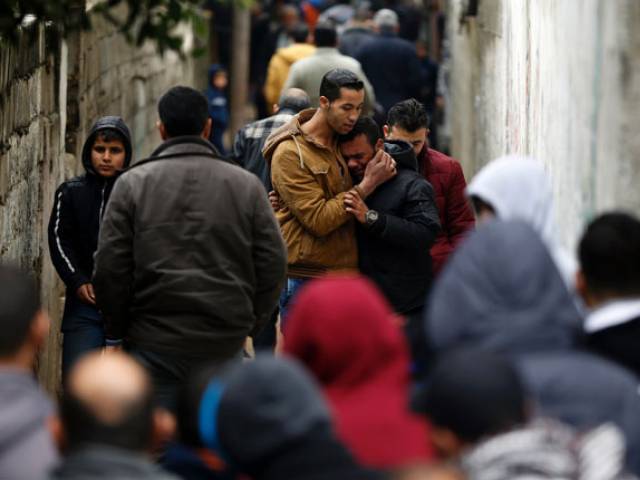 Palestinians mourn the death of seven Hamas militants who were killed after a tunnel built for fighting Israel collapsed in the Gaza Strip during their funeral procession in Gaza City on January 29, 2016. PHOTO: AFP

GAZA CITY, PALESTINIAN TERRITORIES: Hamas is ready for a new confrontation with Israel thanks in part to the reconstruction of tunnels to fight the Jewish state, the Palestinian movement’s Gaza chief said on Friday.

“East of Gaza City, underground heroes build tunnels” along the border with Israel, while west of the city they are “testing rockets every day,” said Haniya.

He was speaking to thousands of mourners gathered at the Great Omari Mosque in Gaza City for the funeral of seven Al-Qassam fighters killed this week in a tunnel collapse.

Al-Qassam Brigades said the seven had been preparing “for fighting with the enemy”.

Wrapped in green Hamas flags, the seven bodies were carried to the mosque while crowds chanted slogans calling for violence against Israel.

In a rare move, several Hamas chiefs went to the cemetery located near the border with Israel to place flowers by the graves of the seven fighters.

Haniya described the tunnels as a “strategic weapons” against Israel, and said Hamas fighters are also training and acquiring “all the means to fight and resist”.

Israel has been accusing Hamas of rebuilding tunnels destroyed during the 2014 Gaza war with the aim of launching fresh attacks against it.

Palestinian Hamas militants attend a funeral procession in Gaza City on January 29, 2016 of seven Hamas militants who were killed after a tunnel built for fighting Israel collapsed in the Gaza Strip. PHOTO: AFP

The 50-day war in July-August 2014 killed 2,200 Palestinians, 73 people on the Israeli side, and destroyed or damaged thousands of homes in the besieged Gaza Strip.

The tunnels have been used in the past to store weapons or stage attacks.

In June 2006, a group of Hamas fighters and other militants entered Israel through a cross-border tunnel, seized Israeli soldier Gilad Shalit and took him back to Gaza.

He was then held for five years and eventually returned in a prisoner exchange which saw over 1,000 Palestinians released.

Gaza has remained largely calm since a wave of Palestinian knife, gun and car-ramming attacks began in October in the West Bank, Jerusalem and across Israel, though a number of people have been killed by Israeli forces during violent protests along the Gaza border.