Yusuf Mastik­han said that our countr­y has state-backed feudal­ism since the Britis­h Raj
By Our Correspondent
Published: January 29, 2016
Tweet Email 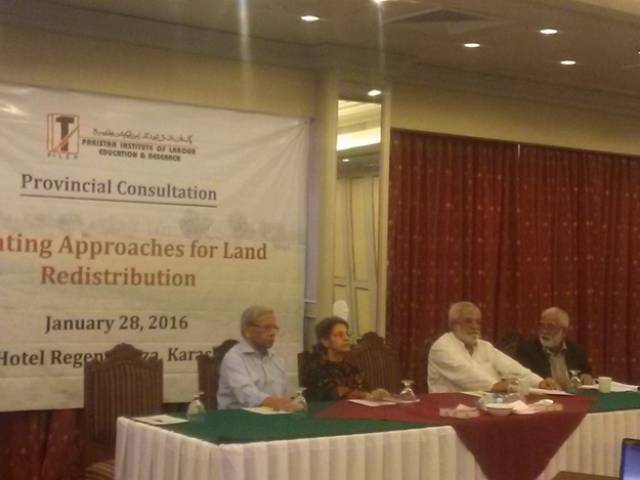 Yusuf Mastikhan said that our country has state-backed feudalism since the British Raj. PHOTO: FACEBOOK

KARACHI: Feudalism and democracy cannot stand hand in hand, which is why we need to change the entire system as soon as possible.

Yusuf Mastikhan, a senior politician and the Sindh president of the Awami Workers Party, said this at a provincial consultation programme organised by the Pakistan Institute of Labour Education and Research (Piler), titled ‘Debating approaches for land redistribution’, on Thursday at Regent Plaza hotel. Speakers included economists, intellectuals, academicians, workers’ leaders and politicians.

Mastikhan said our country has had state-backed feudalism from the British era and unfortunately we could not eliminate this from our society. “Feudalism and democracy cannot stand hand in hand so we need to change the entire system as soon as possible” he said. He urged that we need to make a powerful front against feudalism.

According to Indus Resource Centre adviser Nikhat Sattar, feudalism is not about a single person but about a mindset that promotes inferiority complexes in society.

Piler executive director Karamat Ali said unfair land distribution issue existed before Pakistan came into being. Criticising the political parties, he said in Punjab 80% of the elected representatives are feudal lords and, in Sindh, the figure is 90%, which is alarming. He stressed upon the Pakistan Peoples Party (PPP) government to mend the tenancy act and exclude the clause of forced labour. “We have to take these issues [up] on the national level and for this a middle-class party has to move forward,” he added.

Akmal Hussain, a professor of economics at the Forman Christian College Lahore who joined the event via Skype, said the difference between poor and rich is increasing alarmingly. He added that no country has ever survived if it has issues of inequality. He said not a single system visualises a society where the rich travel in luxury cars and the children of the poor die in Thar due to malnutrition.

Talking about land rights, Sattar said redistribution of land is a matter of social economic development of the state. “Every government has used land to progress in their tenure because of which our mind-sets have the feudalism concept,” she said. “The only solution is to make watch committees against land-grabbing.”

Economist Kaiser Bengali presented a slide show, revealing that we are still standing at the point where things started centuries ago. He claimed that non-progressive people are the reason behind all the lack of development regarding land reforms. Ali concluded that land holding system in Sindh has been through inheritance, particularly after Partition. He said the situation is still the same despite passage of 70 years.

Ghulam Ali Leghari, a hari (peasant), explained his case at the event. He said that the tenancy tribunal had allowed him to cultivate the agriculture land. Despite this legal favour, certain armed men attacked his house and forced the family members out of the house. Since then, he said, he knocked the doors of courts and political parties but there is still fear and they cannot enter the area.