Qingqi owners want to be back on the road

Qingqi owners want to be back on the road 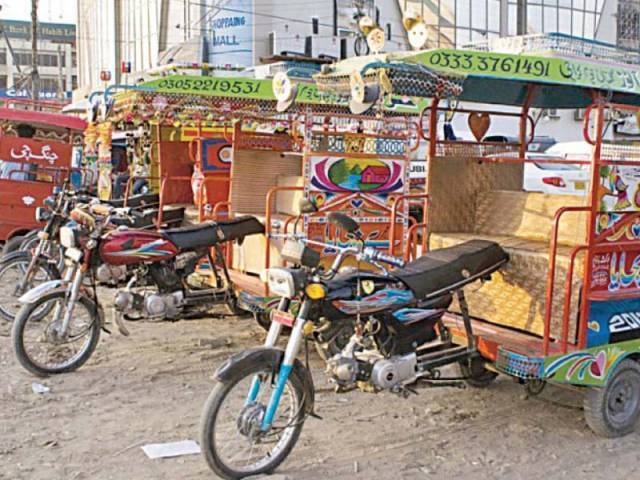 KARACHI: The Sindh government is all set to allow to the comeback of Qingqi and motorcycle rickshaws on the roads of Karachi after the Supreme Court’s recent order, but under certain conditions.

However, the All Karachi Qingqi Rickshaw Welfare Association insists that it be allowed to operate for the time being and meet the conditions simultaneously.  In its January 6 order, the Supreme Court had directed Qingqi owners to conform to certain specifications after which they could come out on the streets. The order stated that the seating capacity of the Qingqi be limited to four people with a safety guard installed at the front and back for safety of travellers, whereas, the engine of the Qingqi or motorcycle rickshaws must not be below 100cc. The motorcycle-rickshaws should be factory assembled with hydraulic brakes, and the size of the front and rear wheels should be 22 and 16 inch in diameter, it was directed. The apex court also asked the provincial transport authority to ensure compliance of the order by submitting a report after 90 days.

Qingqi association to go to court against ban

Meanwhile, due to the ban on Qingqis since the last six months, All Karachi Qingqi Rickshaw Welfare Association president Safdar Shah Qadri insisted that they be given a year to modify their vehicles and till then, be allowed to ply in the existing condition.

“Since six months our business is at a halt and we have no other source of income. How can we alter our vehicles all of a sudden,” he said.

Refusing to accept the association’s demand, Sindh transport secretary Tauha Ahmed Farooqui responded that they had already given Qingqi owners a lot of time to modify their vehicles. The specifications, according to him, have been inked with their consent.

The Qingqi owners, he said, can modify their vehicle from any registered workshop and prove it via proper invoice. To this, Qadri, responded by saying “Tell us a workshop which will give proper invoice, we will queue up our vehicles there.”

Is Karachi ready to be the second largest city in the world in 15 years?

After getting their Qingqis altered, Farooqui said they would have to obtain a certificate from the fitness department, which is soon going to be privatised.

As a next step, Qingqi owners would have to obtain route permits from the Regional Transport Authority. Following that, he said the Excise and Taxation Department would register them following which drivers will have to obtain licences and also pay the proper tax.