Only locals and regula­r visito­rs come over to experi­ence walkin­g on ice
By Shabbir Mir
Published: January 25, 2016
Tweet Email 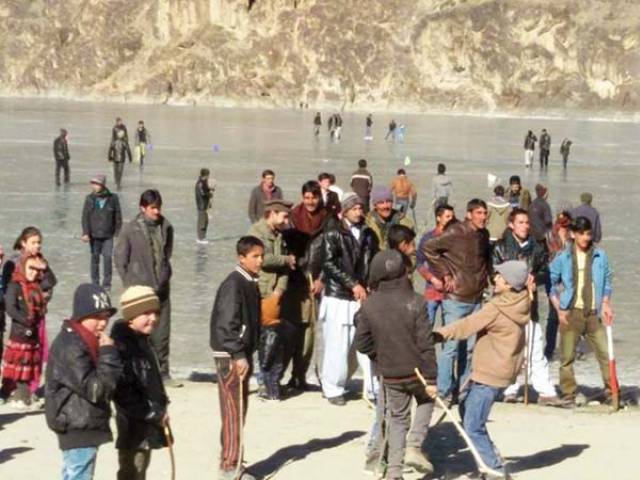 GILGIT: It’s not unusual for the youth in Gilgit-Baltistan to risk their lives on the frozen surface of Khalti Lake for a thrill. Even children from adjacent areas go for a stroll on the icy surface. This seems hardly a risk when a rough and tumble football tournament is played every year on Khalti – teams from Ghizer usually participate.

At 7,000 feet, the lake is said to be 30 to 70 feet deep. Situated in Gupis Valley in Ghizer district, it is located about 120 kilometres
from Gilgit.

Khalti freezes over in December and remains so till January, allowing locals an opportunity to hang out and play sports in an otherwise entertainment-strapped region.

“I know playing on the surface is as risky as playing with fire,” Muhammad Imran, a young guy from Gilgit who visits every January with his friends, told The Express Tribune on Sunday. “But the joy overtakes the possible consequences of falling in.”

[Not] on thin ice

Although there is a restaurant near the lake and a Pakistan Tourism Development Corporation motel in the area, tourists believes facilities can be improved and make more attractive.

“There should be boats near the lake during summer,” Munir Ahmed, a resident of Faisalabad in Punjab, said. “If this was Europe, Khalti would have been a lucrative source of revenue for the government and locals.”

According to Ahmed, who frequently visits G-B, the lake should be a major tourist spot, especially for foreigners.

But the crippling cold, coupled with absence of facility keeps all but the very daring away during winter.  When winter ends and the temperature rises slightly, the area becomes picturesque and would be an ideal retreat. The neglected state of affairs, a lack of tourist attractions means winter or summer, few put Khalti Lake on their next holiday destination.

Ice depositories no one knows about

Glaciers in Pakistan constitute the biggest mass and collection of glaciated ice found anywhere in the world outside the northern and southern polar regions. These glaciers are heavily concentrated in the three great mountain ranges of Karakoram, Himalaya and Hindukush, situated in G-B and Chitral.

The junction point of the three mightiest mountain ranges is in Gilgit.

According to International Centre for Integrated Mountain Development, Pakistan is home to around 5,218 glaciers; a total area of 15,040 square kilometres. In addition, around 2,420 glacial lakes have also been identified and mapped in Pakistan. Karakorum Range has the greatest share as almost 37% of the region is under the glaciers there.

Karakoram is also home to the world’s third longest Biafo glacier, which is 63km long. It meets Hispar Glacier at the height of 5,128 metres, creating the longest glaciated highway—100km—in the world from G-B’s Askole in Shigar valley to Hispar in Nagar Valley.