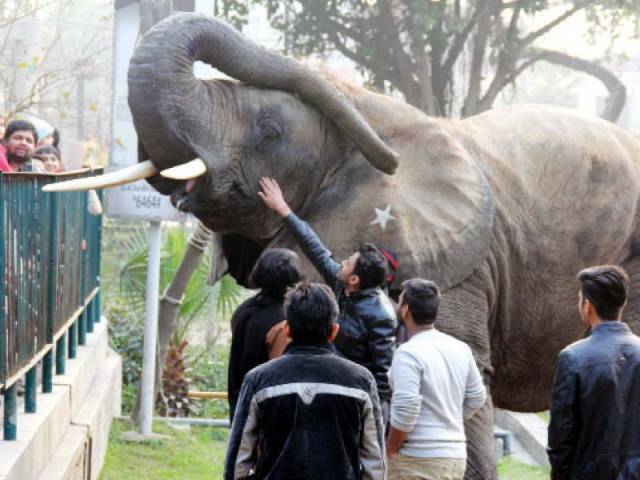 Suzi raises her trunk as a group of zoo visitors pet her. PHOTO: AYESHA MIR/EXPRESS

LAHORE: Precautions taken by reinforcing cages are often flouted at the enclosure of Suzi the elephant in Lahore Zoo.

Hopping across a small fence, the young—mostly boys—cross over into the enclosure to pet the animal. One such group of individuals told The Express Tribune that they were not too scared of the elephant.

Ahmed, only wanting to be identified by his first name, said this was the first time he had entered the enclosure from the side. “I’ve never been this close to an animal this big,” a visibly excited Ahmed said on exiting the enclosure. Zahid, another friend of his, who was the first to cross into the enclosure among the group said he had earlier done this in the company of his cousins. “Nothing happens. The trainer is right here,” he said.

The elephant is one of the select animals at the venue that continue to interact with visitors. Accompanied by its trainer, the elephant accumulates money from the people by affording them an opportunity to pet its trunk.

Lahore Zoo Education Officer Kiran Saleem said children are taken inside the enclosure to feed the elephant or pet it in the presence of officials. “There were around 20 media people filming the animal on the occasion of World Elephant Day last year,” she said.  Saleem said they were only able to do this in the presence of its trainer. “The elephant recognises only its trainer and responds to his directions,” she said.

Saleem said such initiatives are only executed in the presence of officials. She said individuals are prohibited from entering the enclosure at will. “One must not forget that Suzi is an African elephant. Elephants of its ilk are aggressive animals,” Saleem said. She said if some individuals—were able to enter the enclosure—they must have been turned away by Suzi’s trainer.

The zoo education official said all precautions are taken to provide visitors with a safe environment to observe animals. She said enclosures housing all animals that could harm the people are reinforced. Saleem said animals like big cats or rhinos that are more likely to harm visitors were kept at a distance. “Even deer with long antlers can harm visitors. So their cage, too, has been reinforced,” she said.

The zoo education official said it was binding to take such measures as visitors often needled animals, prompting a response. She said lack of public awareness also compelled the zoo to take extra precautions.