Blast from the past: New language system of Gandhara civilisation discovered

Blast from the past: New language system of Gandhara civilisation discovered 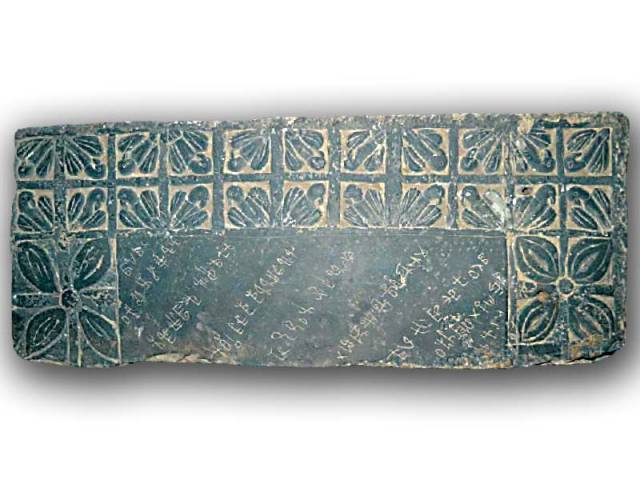 Another language system of the ancient and glorious Gandhara civilisation, which flourished in the northern areas of Pakistan and eastern parts of Afghanistan in the early first millennium BC to the 11th century AD, has been discovered recently.

The slabs were found from various areas. A particularly large one was discovered during routine construction work in Hund, one from Dir, a small piece from Sethi House in Peshawar, some from Buner and a few from Swat. Some of the slabs are in private houses and have not been reclaimed as no major work on scripts has been carried out during excavations.

According to University of Peshawar (UoP) Archaeology department head Dr Muhammad Nasim Khan, who is also currently working on ancient scripts, the slabs discovered from different areas reveal a new language system known as Pushkarasani. “The aberrant script present on slabs from Hund, Dir, Buner, Peshawar and Swat remains a mystery for us and will be challenging for epigraphists to decode,” he said.

Trail of the past

Muhammad Nasim said this language system used to be called the Kohi script. However, after years of study, newly discovered specimens revealed it is in fact a different language. Hence, it was renamed the Pushkarasani script.

Like the Kharoshthi language script, the direction of writing of Pushkarasani script moves from right towards the left. Even though there is more information that the recently discovered slabs bear resemblance to ancient languages like Brahmi and Kharoshthi, the Pushkarasani script is definitely completely new and needs detailed studies to decode it.

Moreover, while inscriptions collected from different parts of Gandhara civilisation are written in a very similar manner when compared to Pushkarasani script, paleography studies show these inscriptions actually do not belong to the same era of the civilisation.

According to the researcher, Pushkarasani was engraved on different types of slabs, including schist, granite, marble and stone. One of the slabs, with half its portion lost, and is engraved with nine lines containing 78 signs, and is arranged in 45 different groups and framed with flowers and birds. Another marble slab discovered in Hund, the third and last capital of Gandhara civilisation, contains four-line inscriptions with 138 signs. The signs were arranged under 90 different groups. Muhammad Nasim said these scripts were in use between the first to eighth centuries AD.

The past and future

According to Muhammad Nasim, although the number of inscriptions discovered during the last few years is quite impressive, a large amount of work still needs to be decoded to assess the language engraved on the slabs. He said initial studies reveal the inscriptions are religious, which can give useful information about ancient times and lifestyle.

In the Gandhara civilisation, 64 languages existed; however, little evidence about them has been unearthed for archaeologists and epigraphists during hundreds of excavations conducted in the past.