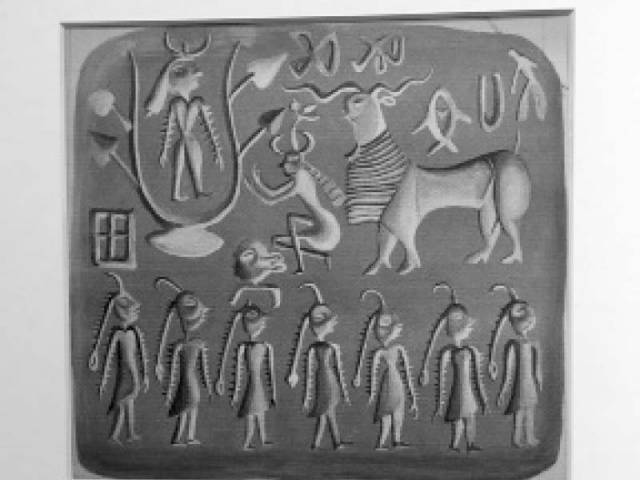 An exhibition of ancient artefacts, contemporary potteries, digital art, photographs and interpretive artworks titled ‘Harappan Connections’ opened at the Alliance Francaise on Friday. It was organised by the French cultural centre and was actually an excerpt from a larger exhibition titled ‘Rediscovering Harappa’ at the Lahore Museum.

It displays a lot of digital art because the originals are exhibited at the museum. The exhibition features work of several artists and students from various institutes.

It was opened by the French Cultural Counsellor Andre de Bussy who said he was honoured to be a part of the exhibition and spoke about the history of the Harappa Civilisation. “The exhibition refers not only to the archaeological site of Harappa near Sahiwal, in fact, it represents the entire civilisation, which is also called the Indus Valley Civilisation. It takes back to 2600 BC and is one of the oldest civilisations of the world and, therefore, an exhibition featuring artwork representing it certainly stands out,” he said.

Dr Tania Majeed, the brain behind this exhibition told The Express Tribune that she wrote this project two years ago and entered into a UNESCO national fund for the promotion of culture competition where it received an award. She said the project featured a major exhibition using the Lahore Museum’s collection and a three-month internship programme for 30 students during the summer at the Lahore Museum where they did these drawings and maps, all related to Harappa.

She said the exhibition is special because it represents the artefacts from Indus. “Indus is really about the extraordinary in the very ordinary things of life that are often ignored otherwise,” she said. In her welcome address, Dr Majeed, who is a teacher at Lahore University of Management Sciences and works as a consultant at the Lahore Museum, said that one of the most striking features of the Harappa civilisation is that it is extremely simple with no majestic palaces or display of wealth. “Most Indus objects are small and unassuming, which is why they are easily dismissed and ignored. I often tell my students that it requires an attitude of humility in order to truly appreciate something like this and to be able to see the love, joy, playfulness and spiritual qualities of the people who make these objects,” she said.