Our resolve to fight terror stronger than ever: PM

Our resolve to fight terror stronger than ever: PM 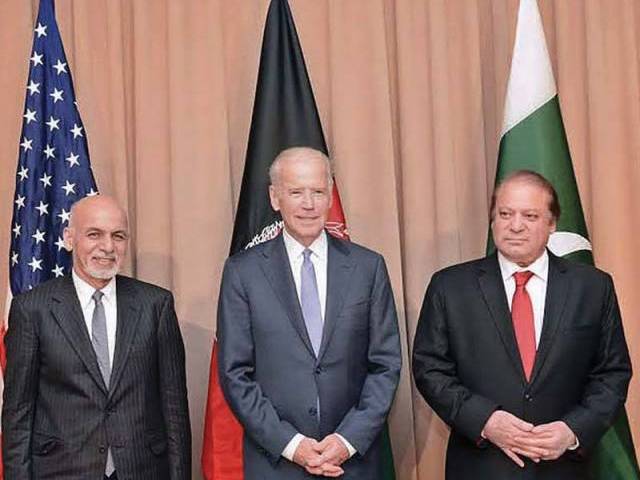 DAVOS: Prime Minister Nawaz Sharif on Thursday said Pakistan’s resolve to fight terrorists is getting stronger and that its successful campaign against terrorism has broken the backbone of militants, who are now on the run and choosing soft targets.

Nawaz Sharif was giving a talk on ‘Regions in Transformation – South Asia’ at the Congress Centre in Davos, where he arrived on Tuesday to represent Pakistan at the 46th annual meeting of the World Economic Forum (WEF).

Talking with reference to Wednesday’s militant attack on the Bacha Khan University in Charsadda, in which 21 people including students and teachers were killed, the prime minister said the university proved to be an easy target for the terrorists and precious lives were lost.

“We knew that the blowback would be severe. It was severe when the operation [Zarb-e-Azb] was started and now the terrorists are on the run and they are choosing soft targets,” he said.

Mentioning the gains of Zarb-e-Azb, which was started in June 2014 against the militants holed up in North Waziristan Agency, he said: “We are able to destroy their infrastructure and dismantle their networks, hideouts and sanctuaries and this has broken their back.”

The prime minister said the decision to launch Zarb-e-Azb was taken after careful consideration.  He said it was a calculated move – involving 180,000 troops –and has yielded very good results. “[Due to the operation] the ability of the terrorists to strike back has been considerably weakened,” he said.

He said Pakistan, in the war against terror, had paid a very heavy price in terms of lives, apart from economic losses of more than hundred billion dollars. “However our resolve to fight terrorists is getting stronger,” he added.

The prime minister said it was very important for his government to tackle the challenges it inherited, as soon as his government came into power. He said these involved reviving national economy, power shortage and scourge of terrorism. “So I think we are successful on all these three fronts and with the terrorism coming down, and militancy reducing, the economy is picking up,” he said.

Nawaz Sharif mentioned that the country’s GDP growth rate was 3 per cent earlier. But now it was 4.2 per cent, he said, adding that he expected it to cross 5 per cent. Inflation was also down to 2 per cent, unemployment was also declining sharply and revenues were increasing at a rate of 33 per cent.

“A very good turnaround is taking place in Pakistan and investment is pouring in,” he said.

He said Pakistan’s economy was on the right track and his country was getting an investment of 46 billion US dollars from China alone.  He said the investment was coming in three main areas of infrastructure, power sector and railways.

The prime minister said the benefits of multibillion dollar China Pakistan Economic Corridor (CPEC) were not limited to Pakistan but it would benefit the entire region. He said more than half of the world’s population was going to gain from the CPEC that would link many countries and regions to boost trade.

He termed the CPEC a game changer for the entire region and said the future of the world was in this region. The CPEC is a network of roads and rail links that will connect China to Arabian Sea through Pakistan’s deep sea port in Gwadar.

Nawaz said foreign and domestic investment was on the rise with the decline in terrorist incidents. “Foreign companies are pumping in more money in Pakistan, while the local investors are playing their part too,” he said.

The prime minister said work on the Turkmenistan-Afghanistan-Pakistan and India (Tapi) gas pipeline would also boost country’s industrial sector. “Gwadar will be one of the most modern ports and help the landlocked countries of Central Asia to get access to country’s deep seaport,” he said.

Earlier during the day, Prime Minister Nawaz held a trilateral meeting with the US Vice President Joe Biden and Afghan President Ashraf Ghani to discuss efforts for peace and reconciliation in Afghanistan on the sidelines of the 46th WEF.

According to a statement, Biden and Ghani condemned the Charsadda terror attack and conveyed their condolences over the incident to the premier. Both the leaders appreciated the resolve of the Pakistani nation in its war against terrorism and extremism, besides reviewing the peace and reconciliation process in Afghanistan.

According to the White House ‘statement, the US vice president reaffirmed US support for reconciliation and improved bilateral ties between Afghanistan and Pakistan and called them important pillars of regional stability.