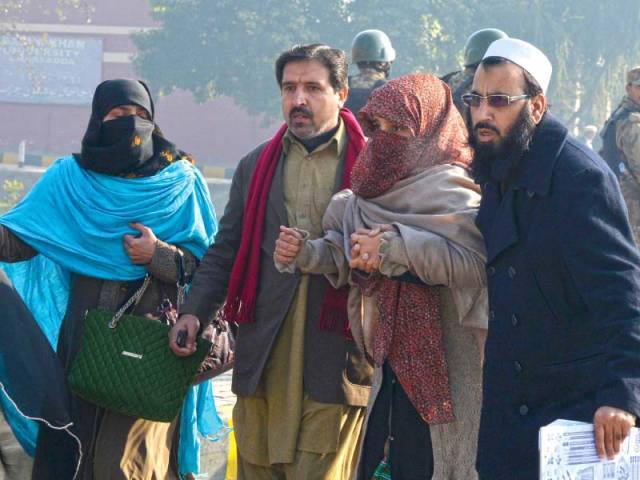 More than a year after a bloody Taliban rampage at a military-run school in Peshawar, terrorists killed 21 people in a near-identical attack on a state-run university in nearby Charsadda district Wednesday morning. The heroics of campus guards, however, prevented bloodshed as they engaged the terrorists before security forces moved in under thick fog to eliminate the attackers.

A splinter group of the outlawed Tehreek-e-Taliban Pakistan (TTP) claimed credit for the sickening violence at the Bacha Khan University in the Palosa area, 15 kilometres southeast of the main Charsadda Bazaar, though the fugitive leadership of the umbrella group denied involvement.

Four terrorists, armed with sub-machine guns, pistols and hand grenades, launched the attack around 8:45 when the campus was enveloped in thick morning fog. According to eyewitnesses and officials, the terrorists scaled the back wall of the campus and entered the guest house of the vice chancellor where they shot dead assistant caretaker Fakhre Alam.

“They [terrorists] cut the barbed wire with a cutter and then entered the campus where they were engaged by a security guard. The guard was injured in the gunfight with the terrorists but somehow managed to crawl to safety leaving behind his shoes and gun,” DIG Charsadda Saeed Wazir told journalists. Other campus guards engaged the terrorists until police commandos and army troops reached the spot, he added. “Since there is no military base in Charsadda, troops had to be called in from Mardan district.”

DIG Wazir put the death toll at 21, saying that most of the victims were shot dead at a hostel for male students. Four attackers killed by security forces were not included in the toll, he added. “More than 30 others including students, staff and security guards were wounded.”

Security Officer of the campus Ashfaq Ahmed told The Express Tribune that four security guards were deployed at as many posts who engaged the terrorists. The attackers had taken advantage of the fog as visibility was less than 10 metres at the time.

“After facing stiff resistance from the guards at the administration block, the attackers moved towards the hostel named after popular cleric Maulana Fazal Mahmood Makhfi. Around 200 students were present in the hostel at the time as most of them were on holidays after their examinations,” Ahmed said.

Azeemullah, a geology student at the hostel, said the terrorists opened fire at the students as they tried to exit the building. “We waited in our rooms but when the attackers fired at us we rushed to the gate and I’m not sure how many managed to escape,” added another student Iftikhar Ali.

The Express Tribune reporter saw pools of blood and overturned furniture at the hostel, where the terrorists were pinned down by security forces cornered the four gunmen.

Dr Muhammad Shakeel, the university’s director administration, was stranded on the floor of the administration block along with some students when gunshots rang out. “We stayed there helpless as we had no weapons to fight the terrorists,” he added.

Dr Shakeel was finalising arrangements for an ‘Aman Mushaira’ scheduled at 10am to mark the death anniversary of maverick Pashtoon nationalist leader Abdul Gaffar Khan, popularly known as Bacha Khan. The university is named after him. “Our security guards with their limited resources fought bravely for an hour and deserve to be praised,” he added.

Dr Shakeel further said they called the police and activated the SOS system but it took the security forces almost an hour to reach the campus and control the situation.

Shahzad Ali, one of the guards who had engaged the attackers, said the terrorists appeared to be in their 20s. “They were firing indiscriminately. I evacuated female students from a common room to safety and went back to engage the attackers,” he added. “I had only one magazine in my rifle with 30 rounds which I fired at them.”

Lt Gen Bajwa also said that security guards put up resistance that saved many lives. Later military troops were moved in from Peshawar who contained the attackers to a building where some of them were killed. Others were eliminated on the rooftop of the building, he added.

The casualties were evacuated to the nearby District Headquarters Hospital and to the Lady Ready Hospital in Peshawar. AIG Bomb Disposal Squad Shafqat Malik confirmed the attackers were not wearing suicide vests but were heavily armed. “It is premature to make a conclusive statement as we are still investigating and collecting evidence,” he said.

After the hours-long operation, army chief Gen Raheel Sharif, PTI Chairman Imran Khan and K-P Governor Sardar Mehtab visited the university, while Chief Minister Pervaiz Khattak canceled his scheduled visit to Scotland and returned from Dubai. The government announced a three-day national mourning. National flag on all government buildings will fly half-mast, while Quran Khawani will be held for the martyrs.

Khalifa Omar Mansoor, the chief of the Darra Adam Khel and Khyber Agency chapter of the TTP, claimed responsibility for the attack, but the outlawed group’s central spokesperson Muhammad Khurasani said they were not involved. Speaking by cellphone from somewhere in Afghanistan, Khalifa Mansoor told The Express Tribune that his group had sent suicide bombers to carry out the attack. He named the attackers as Omar, Osman, Ali Muhammad and Abid.

However, TTP central spokesman Muhammad Khurasani said their fugitive leader Maulana Fazlullah had nothing to do with the attack. “We will try those who used the name of the Taliban for this attack in a Sharia court,” he said in an email sent to journalists.