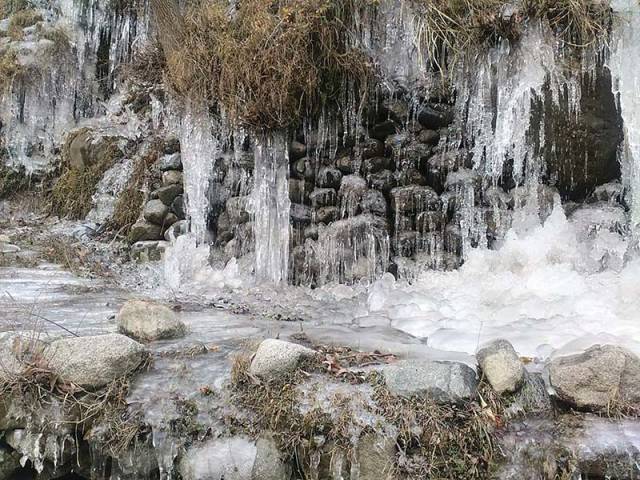 GILGIT: It happens every year. A relentless winter creeps in restless for a place to settle; eventually it finds a home in Gilgit-Baltistan, inching out residents who can afford to leave. The rest are left stranded within their own homes.

The few families who can afford to travel, shift from the cold mountainous areas to warmer areas, mostly in Punjab. The migration starts following the closure of educational institutions for winter vacations in December. People pack up their belongings, wind up their businesses and move out of the landlocked region to cities like Rawalpindi.

“Rawalpindi is the ultimate destination in winter for those who can afford the move,” Qasim Khan, a transporter who offers cars on rent from Gilgit to Rawalpindi, told The Express Tribune. “Unlike in the summer, in winter our cars are hired by families bound for Rawalpindi,” Qasim said.

This is by no means a flight of fancy by any definition; November to March the mercury slips till it hits -10 degrees.

In Skardu, Astore, Hunza and Ghizer, temperatures fall even lower, turning the area unimaginably cold and frigid. Locals left behind are not only too poor to move out, they cannot even afford to heat up their homes as regardless of its constitutional status, most of G-B is without gas connections and an insufficient capacity to generate power.

Firewood, the main source of heating, can cost a family over Rs50,000 each winter. “Around 40 kilogrammes of firewood costs about Rs650,” a government employee said.  “If you use this to heat one room only, it might last a week.”

Those who cannot even afford firewood head to the woods to gather and fell what they can to stay warm, cook food and even melt ice to drink as water. Some of what they cut down are trees which they grow for this very end; the rest is whatever is within reach and will help survive.

Although no record is available with any department of the government, it is believed about 5% people fall in the category of “affluent” and migrate to places less cold and impossible. Their departure creates further problems for people still living in the area as businesses shut down, products go out of stock and employment opportunities cease to exist.

“People who leave are the ones who own and operate local businesses,” Riaz Muhammad, the owner of one of the main departmental stores, said. “When they go, transactions come to a halt,” he added.

Many young people from Ghizer, Astore and Baltistan prefer to work in cities as winter grounds sit heavy and unyielding; all agricultural activities in the valleys come to a halt, leaving the able and the young jobless.

Maqsood, a businessman who hired a house for three months in Rawalpindi said, “There is no escape from spending in excess in winter so I’d rather spend it on a decent few weeks elsewhere – where it is warmer.” Sharing his expenditure break-up, he said, “I pay Rs15,000 for rent and all my other expenses amount to about Rs20,000 per month here.”

However, of the 1.5 million people estimated to inhabit G-B, the luxury to travel is available to a limited people.