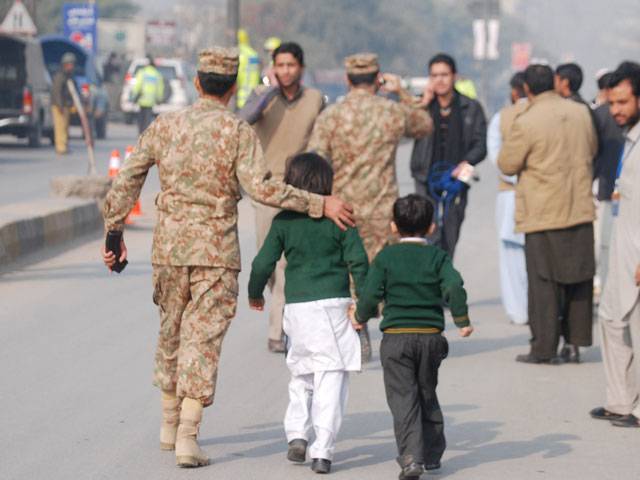 The ruckus started when some girls from Shaheed Hassanzeb Government Girls High School No1 Peshawar Cantt said they saw a suspicious looking person running inside their school. Following this, panicked students and teachers ran towards the exit. The principal called the police and military to investigate the matter.

One of the walls of Shaheed Hassanzeb GGHS No1 is linked with main Saddar Bazaar where a large number of people gather every day. This made things worse as people in the bazaar started gathering outside the schools frantically calling their families.

A search operation was launched in Cantonment after police and military personnel reached the site. School buildings were eventually evacuated following the situation.

Adnan Khalil, a resident of the area, told The Express Tribune his wife called him, saying she was worried about her daughters in one of the Cantt schools. Their neighbour’s daughter had come home alone, fearful of getting stuck in an attack.

Khalil said he was scared and did not know what was going on.

In a separate incident, not related to terrorism or violence, Farhat, a teacher, was burnt to death in an accidental fire which erupted as she worked with chemicals in a laboratory. A rescue team reached the government-run girls school in Changarabad and shifted Farhat to the hospital where she succumbed to her injuries.

By the time this incident became public knowledge, the story being told was nothing like the facts on ground. Rumours suggested she was shot and killed.

In another incident, a rehearsal for a play was going on in the FG Girls Degree College when the outsiders thought it was a firing incident, which also triggered panic among the locals

When contacted, DEO Ulfat Begum denied rumours of threats or the possibility any “suspicious man” was inside Shaheed Hassanzeb GGHS No1 School.

She said she visited the schools herself and there was no threat to the academies. “The schools have been opened, and students and teachers are creating panic,” she added.

The security system of the schools across K-P was reportedly tightened after the attack on Army Public School in December 2014. Strict actions were taken against school administrations—many of which were private institutes—who failed to hire security guards, install CCTV cameras and put up barbed wire on the walls, which were also to be extended.

In a message conveyed to The Express Tribune, Chief Minister Pervez Khattak said, “These were only rumours. Police and security officials are on high alert and arrangements have been made to secure schools.” He said parents should not base their actions on rumours.

Earlier on Saturday, the schools were shutdown around 10:30am following similar rumours. Parents who would rather not relive December 16, 2014 gave in to fear and reached schools after a call was made to them, instructing them to pick up their children.