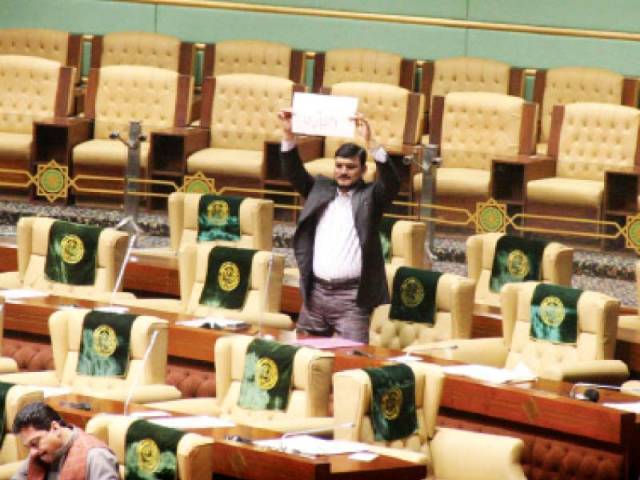 A lawmaker from the MQM protests by holding a placard that says ‘give us powers’ during Monday’s session. PHOTO: ONLINE

Heer Ismail Soho and Naila Munir of the Muttahida Qaumi Movement (MQM), the largest opposition party in Sindh, had requested the speaker adjourn the proceedings and discuss the multiple and frequent deaths of children in the desert region.

“The chief minister claims that everything is taking place smoothly and these deaths have not occurred due to drought and food shortage,” said Munir. “Can you please brief this House on this issue?”

Senior Minister Nisar Khuhro and food minister Nasir Shah responded and reiterated the chief minister’s (CM) claims that these deaths were not caused by the drought.

Deaths in Tharparkar not due to drought, says Sindh CM

“The government has taken extraordinary measures in the last seven years by providing facilities and making the hospitals and dispensaries functional [in the area],” claimed Khuhro. “It is not a definite matter so the government opposes this adjournment motion.”

In his speech, the food minister listed that there are 435 basic health centres in 44 union councils of Tharparkar. Only 44 are non-functional, said Nasir. “There was sufficient rain and people have cultivated various crops,” he said. “One cannot hold the government responsible for a baby who dies on its way to the hospital.”

Meanwhile, opposition members insisted on taking the matter up for discussion but Durrani termed it ‘out of the order’.

Earlier, health minister Jam Mahtab Hussain Dahar had claimed that only 30 of the 215 dispensaries in Thar are functional. He was responding to a call-attention notice moved by MQM’s Muhammad Hussain on the allocation in the budget for only 30 dispensaries in the district.

“We are in the process of appointing doctors and medics for all the dispensaries that were lying non-functional,” said Dahar. “We have restored the buildings and have started recruitments. The budget cannot be allocated for all dispensaries until or unless the staff is appointed.”

The opposition members also pointed out alleged police atrocities in various parts of Karachi. “The police have hired criminals on contract to conduct raids and arrest innocent people,” said MQM MPA Saifuddin Khalid, as he raised the issue on a point of order.

He told the lawmakers of an incident in which an ASI, Akram, was arrested along with nine other suspects by the Rangers in Orangi Town. “They are operating as an organised gang in different areas and conduct midnight raids,” he claimed. “After apprehending people they demanded huge bribes for their release.” Khalid pointed out that this practice flourishes with each passing day in his constituency of Orangi Town but the authorities have yet to take action.

Opposition leader Khwaja Izharul Hasan added that this practice is common in Korangi, Saudabad and Baldia as well.  “We have received a number of [such] complaints,” he said.

When the session started, opposition members moved call-attention notices to demand cleanliness drives in the city, registration of seminaries and presence of chlorine in the water supplied to the city.

The House witnessed uproar when the speaker did not allow MQM MPA Zafar Kamali to speak on his call-attention notice to improve cleanliness and sanitary conditions in Mirpurkhas. Local government minister Jam Khan Shoro explained that they are trying their best.

During Monday’s session, the Sindh Assembly passed a law to establish the Benazirabad Intermediate and Secondary Education Board. Moving the bill, education minister Khuhro said, “The students of Sanghar, Naushero Feroz and Benazirabad will benefit from this newly created board.”

The opposition leader supported the bill but raised the issue of missing examination controllers in Karachi. “We have no objections to the new board but we will appreciate if the government also appointments the controllers for the Board of Secondary Education and Intermediate in Karachi,” he said. These posts have been lying vacant for months, he added. Khuhro responded that the controllers will be hired soon on merit.