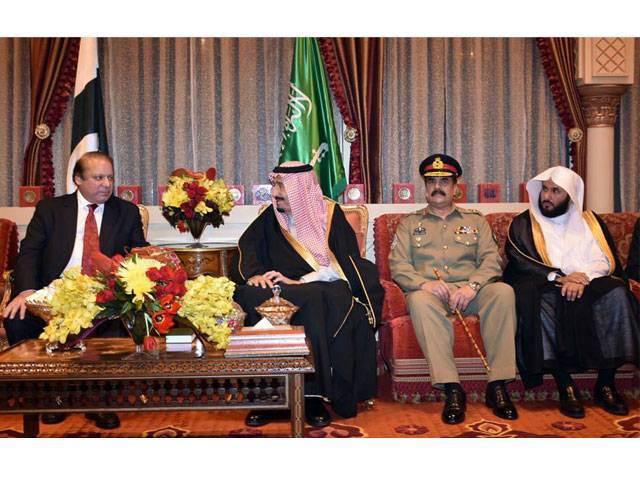 “After arriving in Riyadh, the army chief met the Saudi defence minister,” the Inter Services Public Relations said in a statement.

During the meeting, General Raheel highlighted Pakistan’s perspective on the Middle East situation.

“Due to the situation in Middle East, the Muslim Ummah is weakening,” sources said, quoting the army chief. The COAS stressed the need for opening up the communication channel between Saudi Arabia and Iran, the sources added.

The “prime minister reiterated the people of Pakistan would always stand with the people of Saudi Arabia against any threat to the sovereignty and territorial integrity of the kingdom.”

“King Salman acknowledged and appreciated the sincere sentiments of the Pakistani people and the leadership,” a Ministry of Foreign Affairs statement said. While underscoring the need to further strengthen relations in defence, security, economical and commercial areas, the two sides discussed regional and global issues of common concerns, and agreed to defeat terrorism and extremism, added the statement. Statement available with The Express Tribune

Earlier during the day, General Raheel along with the PM departed for Saudi Arabia and Iran in a bid to defuse tensions between the two regional countries.

“The prime minister wants to defuse tensions between Saudi Arabia and Iran in a peaceful manner,” a statement issued by the Foreign Office said, regarding the premier’s visit.

“Pakistan has deep rooted, brotherly relations with both Saudi Arabia and Iran, and is concerned over ongoing tension between the two Muslim countries,” it added.

Tensions between Riyadh and Tehran have been running high since the January 2 execution of leading Shia cleric Nimr al Nimr and the subsequent attacks on Saudi Embassy and consulate in Iran. Saudi Arabia and some of its allies have cut off ties with Iran, triggering a diplomatic crisis in the region.

Earlier, a senior Pakistani official unveiled that in one of the recent high-level meetings, the civil and military leadership was informed that Pakistan could become a battleground for a proxy war between Saudi Arabia and Iran if their relations continued to deteriorate.

Saudi-Iran tensions: Aziz fails to clear up ‘ambiguity’ in stance

The visit is being described as a wise step in the best interest of the Muslim Ummah and leading politicians and analysts have hailed the premier’s visit to the Kingdom and Iran.

The premier is also scheduled to travel to Zurich on January 19 to attend the World Economic Forum at Davos.