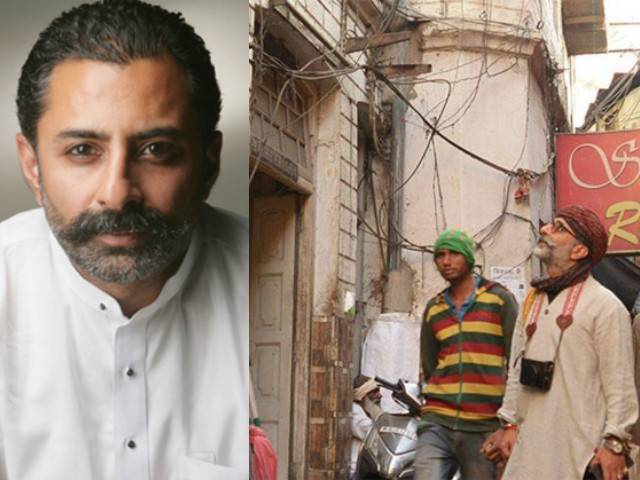 Pakistani designer Yousuf Bashir Qureshi, who is known to have dressed Hollywood’s best including Madonna, Angelina Jolie and Sheryl Crow, replaced his sketch pad for a broom during his recent visit to India.

The designer visited the city of Ajmer on a personal trip where he tried to locate his ancestral home that belonged to his mother Abida Bashir’s family, who migrated to Pakistan during partition.

But it was more than just finding his roots, Yousuf wandered through the narrow alleys of Langar Khana to fulfill his mother’s wish.

Her dream was to see her son sweeping the house clean and although she didn’t live to see her dream come true, the fashion designer made sure he fulfilled her wish. With the help of his eldest maternal uncle, Yousuf was able to track down the house which is now occupied by a khadim‘s family.

“The moment I confirmed that this is the native house of my mother’s family, I closed my eyes for a minute, recalling the childhood days that my four uncles and six aunts spent here,” the designer told Times of India.

And he kissed the doorstep before going down memory lane.

“It was a very emotional moment as I entered the house, climbed the stairs and visited every room. It was as if I was with my entire family as I went from one room to another,” he said.

Due to renovations over the years, the house has been modified but some old structures remain intact. An artist of the floating world

The designer documented minute details of the house so that he could share it with his family back home.

And last but not least, he picked up a broom to clean the house before leaving. “I filmed the cleaning part and sent it to my family members as proof of me fulfilling my mother’s promise,” he said.

He was also presented with some old pictures of the building by the current owner of the house, Syed Hamid Chishty. During his visit, Yousuf expressed confidence in Bollywood’s capability to influence fashion and people in Pakistan.

“We watch Indian films, we idolise the actors. In our wedding functions, we play your songs, we copy your dance moves. Starting from food, the clothes… everything in India. When Bollywood can make Hollywood wear saris, how can we, in Pakistan, remain behind?” he told IANS.

Leaving her footprint in fashion

Talking about the elements of fashion he would like to take back home from India, he said, “There is a lot of fashion in Rajasthan itself. Rajasthan is a very fashionable state, always has been, always inspired me, it’s my ancestral land… in totality, I am extremely inspired.” When asked about sartorial differences between India and Pakistan, he mentioned that the two countries influence each other.

“When I go back from India, obviously my designs will have an impact of the local Indian designers and fashion here. We are humans, anything that is given to us with love, it influences us,” said Yousuf.

He advises designers in India and Pakistan to visit each other’s countries. “We should learn from each other and collaborate as much as we can,” he adds.