Instability will continue in many parts of world, including Pakistan: Obama

Instability will continue in many parts of world, including Pakistan: Obama 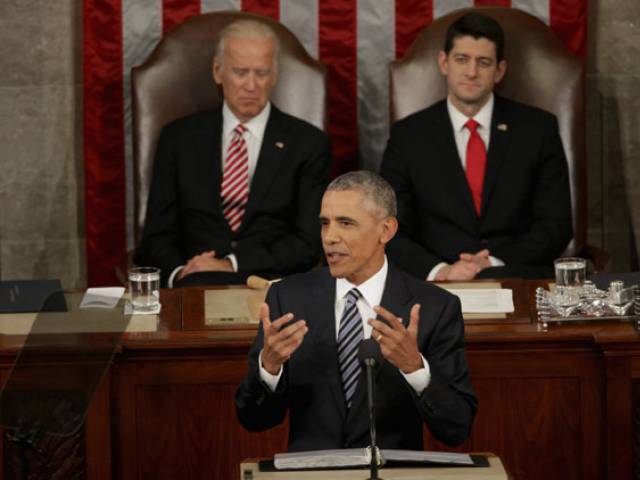 US President Barack Obama delivers the State of the Union speech before members of Congress in the House chamber of the US Capitol January 12, 2016 in Washington, DC. PHOTO: AFP

WASHINGTON: In his final State of the Union address on Tuesday, President Barack Obama said that instability will continue for decades in many parts of the world — in the Middle East, in Afghanistan and Pakistan, in parts of Central America, Africa and Asia, according to the White House official website.

“Our foreign policy must be focused on the threat from ISIL and al Qaeda, but it can’t stop there. For even without ISIL, instability will continue for decades in many parts of the world — in the Middle East, in Afghanistan and Pakistan, in parts of Central America, Africa and Asia,” Obama declared.

He continued, “Some of these places may become safe havens for new terrorist networks; others will fall victim to ethnic conflict, or famine, feeding the next wave of refugees.”

“The world will look to us to help solve these problems, and our answer needs to be more than tough talk or calls to carpet bomb civilians. That may work as a TV sound bite, but it doesn’t pass muster on the world stage,” he added.

Speaking about the Islamic State group, Obama said the terror group did not pose an existential threat to the United States, warning that such talk only emboldens America’s enemies.

President Obama attempted to reset the tone of the national security debate, which has grown more extreme and fearful as the battle to succeed him heats up.

He called on Congress to help him finally close the war or terror detention center at Guantanamo Bay, which he branded a gift to extremist propagandists seeking to stir anti-American sentiment.

And he declared the US military to be the best funded and best trained fighting force in the history of the world, more than capable of seeing off the terrorist threat.

“But as we focus on destroying ISIL, over-the-top claims that this is World War III just play into their hands,” Obama warned a Congress dominated by his Republican opponents.

“Masses of fighters on the back of pickup trucks and twisted souls plotting in apartments or garages pose an enormous danger to civilians and must be stopped. But they do not threaten our national existence.”

US forces are leading an international coalition bombing the IS group from the air over their heartland in Iraq and Syria, and training Iraqi ground forces.

Obama has vowed to dispatch special forces to guide Syrian Arab and Kurdish militias closing in on the capital of the Islamic State’s self-declared caliphate in Raqa.

And US intelligence is helping its allies locate and neutralize extremists plotting attacks in Libya, Somalia, Yemen, Afghanistan and European cities.

But Obama has vowed not to follow his predecessor George W Bush in committing thousands of ground troops to open-ended conflict in the Middle East — and Islamic State attacks have continued.

Last month, a gun attack by a radicalized couple in San Bernadino, California that left 14 dead particularly shocked the American public.
The crowded Republican field jostling for the chance to run for the White House has seized on this and the uncertain progress in the Middle East to brand Obama weak.

“Today, I met with law enforcement officials from San Bernardino, and I can tell you what they need: actions, not words, to secure our country,” said Michael McCaul, chairman of the House Homeland Security Committee.

“Yet the White House is more focused on releasing battle-hardened extremists from Guantanamo Bay than keeping terrorists from opening up new safe havens across the world,” he continued.

“Sadly, it appears the president still wants to falsely declare the war against Islamist terror over, while Americans want him to win it.”
Obama gave such arguments short shrift.

Of the prison camp at Guantanamo Bay, Cuba — where 105 terror suspects plucked from the battlefields of the world are still held — he declared: “It’s expensive, it’s unnecessary, and it only serves as a recruitment brochure for our enemies.”

And he threw the challenge of mounting a serious campaign against the Islamic State group back at Congress, demanding they pass a law authorizing the ongoing war.

“If this Congress is serious about winning this war, and wants to send a message to our troops and the world, you should finally authorize the use of military force against ISIL,” he said.

“Take a vote. But the American people should know that with or without Congressional action, ISIL will learn the same lessons as terrorists before them.”

And, in order to defend his own bona fides as a determined anti-terrroist warrior, he referred his critics back to the greatest victory of his first term against al Qaeda.

“If you doubt America’s commitment — or mine — to see that justice is done, ask Osama bin Laden.”