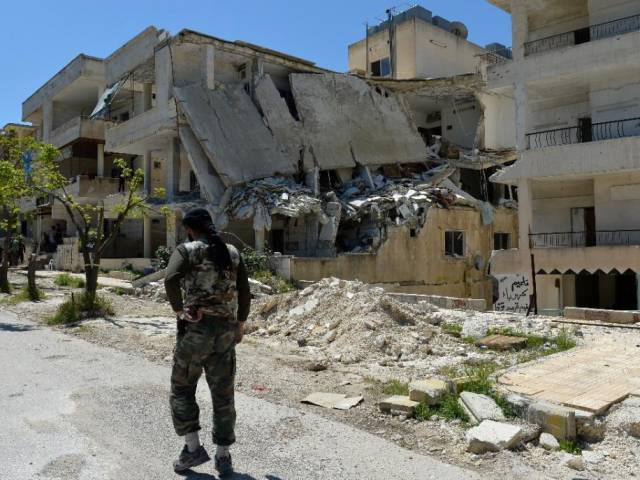 Syrian rebels seized control of the town of Salma in the coastal province of Latakia in 2012. PHOTO: AFP

BEIRUT: Syrian regime forces advanced on Tuesday into the main bastion of rebels in the northwestern province of Latakia, the coastal heartland of President Bashar al-Assad’s clan, a monitor said.

Islamic State lost 14 per cent of its territory in 2015: report

Over the past 48 hours, more than 120 air strikes by Russian warplanes targeted Salma and its outskirts, the Observatory reported.

“Army units are combing the area… to clear explosive devices and mines left by the terrorist groups,” the agency reported.

If the government recaptures Salma, which has been held by opposition forces since July 2012, army units would be able to push further into rebel-held territory in Jabal Akrad, Abdel Rahman said.

Opposition forces in Latakia province — including Al-Nusra — are largely based in the northern and northeastern areas of Jabal Akrad and Jabal Turkman.

Regime forces have fought fiercely in recent months to retake those areas with help from the Iran-backed Hezbollah.

And since September 30, Syrian troops have been backed by an intense air campaign by Russia, a staunch ally of Assad.

In comments carried by SANA on Tuesday, Assad said the support of “friendly nations” like Iran and Russia had allowed Syria to fight off “terrorism”.

Speaking after his meeting with Iranian Interior Minister Abdolreza Rahmani Fazli, Assad said he “appreciated the positions of Iran, which supported Syria in the face of terrorism”.

“Friendly nations, chiefly Iran and Russia, have played an important role in supporting Syrians over the past five years to score victories in their war against takfiri terrorism,” Assad said.

Since the country’s uprising broke out nearly five years ago, Syria’s government has regularly referred to all its opponents as “terrorists”.

On Tuesday, Fazli said Iran had “robustly” supported the Syrian people, who are engaged “in a global war against terrorism and takfiri extremist ideas,” SANA reported.

He said on Monday that Iran was equipping and training Syrian government forces but not providing direct aid.

Last year, a US official said as many as 2,000 fighters from Iran and its regional allies were supporting Syria’s army in offensives against rebels.

Iran denies having fighters on the ground in Syria.

The conflict in Syria erupted in March 2011 with anti-regime protests, which have since spiralled into a full-fledged war that has left more than 260,000 people dead.