'Around 400 are in need of being evacua­ted for life-saving medica­l attent­ion' UN aid chief Stephe­n O'Brien
By AFP
Published: January 12, 2016
Tweet Email 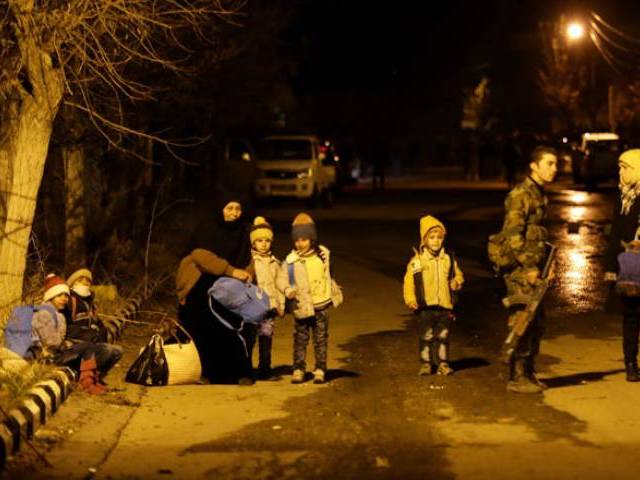 UNITED NATIONS: Some 400 Syrians on the brink of death must be urgently evacuated from Madaya to receive medical treatment, the United Nations said Monday after the first deliveries of aid in months arrived in the besieged town.

Aid workers found the 400 Syrians suffering from starvation, malnourishment and other illnesses during a visit to a hospital in Madaya, said UN aid chief Stephen O’Brien.

“Around 400 are in need of being evacuated for life-saving medical attention,” O’Brien told reporters following a closed-door UN Security Council meeting.

“They are in grave peril of losing their lives.”

The United Nations has asked the Syrian government and armed groups controlling access the town to allow the 400 Syrians to be transported out of Madaya, he said.

Hours earlier, a convoy of 44 trucks loaded with food, baby formula, blankets and other supplies entered Madaya, which has been under siege by President Bashar al-Assad’s forces for six months.

An additional 21 trucks delivered supplies to two other towns besieged by the rebels: Fuaa and Kafraya.

The council met to discuss the situation in Madaya where residents told AFP they had resorted to eating grass and killing cats for meat to survive.

The medical charity MSF says 28 people have starved to death since December 1.

US Ambassador Samantha Power said “over 400 people are on the brink of death in need of immediate medical evacuation” from Madaya.

UN officials are hoping to carry out the evacuation on Tuesday.

Permission for secure access must come from “all the parties who govern any of the routes that need to be deployed, either for the ambulances or for any kind of air rescue,” said O’Brien.

Syria’s UN envoy Bashar Jaafari dismissed reports of starvation in Madaya as fabrications and accused “terrorists inside” the town of stealing the supplies.

Britain and France are calling for an end to the sieges.

“Starving civilians is an inhuman tactic used by the Assad regime and their allies,” said British Ambassador Matthew Rycroft.

“All sieges must be lifted to save civilian lives and to bring Syria closer to peace,” he said in a statement.

The United Nations says it is struggling to deliver aid to about 4.5 million Syrians who live in hard-to-reach areas, including nearly 400,000 people in 15 besieged areas.

“Madaya is tragically far from being unique,” said O’Brien.

French Ambassador Francois Delattre said lifting the sieges was key ahead of a new round of peace talks between Assad’s government and the opposition planned for January 25 in Geneva.

“The intra-Syrian negotiations will not resume unless there is an improvement of the civilians’ plight,” he said.

More than 260,000 people have been killed in Syria since the conflict began in March 2011 with anti-government demonstrations.