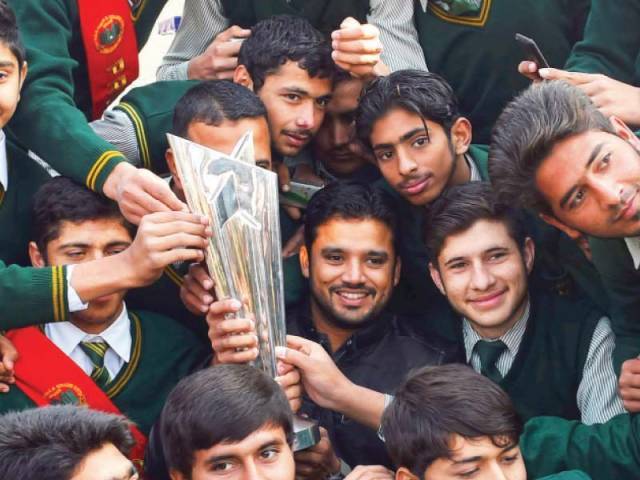 PESHAWAR: The ICC World T20 2016 trophy was launched in Pakistan on Monday at the Army Public School Peshawar to show solidarity with the victims of the December 2014 massacre.

ODI captain Azhar Ali along with APS students unveiled the trophy, which had arrived in Peshawar a day earlier after the Pakistan Cricket Board picked out the school as the venue. The board wanted to give the pupils and staff an opportunity to take pictures with the trophy, officials said.

A large number of schoolchildren, their parents, staff, cricket fans and army officials were present at the launching ceremony.

Talking to journalists, Azhar termed his unveiling of the trophy at APS Peshawar ‘a proud moment’. “I [also] feel very proud that today I am among the brave students of APS,” he said, adding the students who laid down their life for the country would be remembered forever.

On December 16, 2014, Taliban terrorists had killed 144 people mostly schoolchildren in a brazen attack on APS Peshawar. Another 130 people were injured in the deadliest terror assault in Pakistan.

Azhar added that Khyber-Pakhtunkhwa had provided some really talented players to the national cricket team. Pakistan had won the World T20 championship in 2009 under the captaincy of Younis Khan, who hails from Mardan.

He hoped the team would lift the trophy this year once again under the captaincy of Shahid Afridi. “We will dedicate it to the APS students,” he said.

After its launch in Peshawar, the trophy will now travel to Lahore, where it will be unveiled at the historic Minar-e-Pakistan ground.

On January 12, the ICC trophy will be exhibited at the mausoleum of Quaid-e-Azam Muhammad Ali Jinnah in Karachi, from where it will leave for Bangladesh. On January 17, the trophy will be taken to Sri Lanka, the defending champion.

The World T20 trophy began its global journey to 12 major cricketing countries on December 12 last year. It will reach New Delhi on February 1, two days ahead of the start of the mega event. The final game of the tournament will be played on April 3 at Kolkata’s Eden Garden stadium.