He dethro­ned three-time winner Cristi­ano Ronald­o in adding to his four consec­utive awards from 2009 to 2012
By AFP
Published: January 12, 2016
Tweet Email 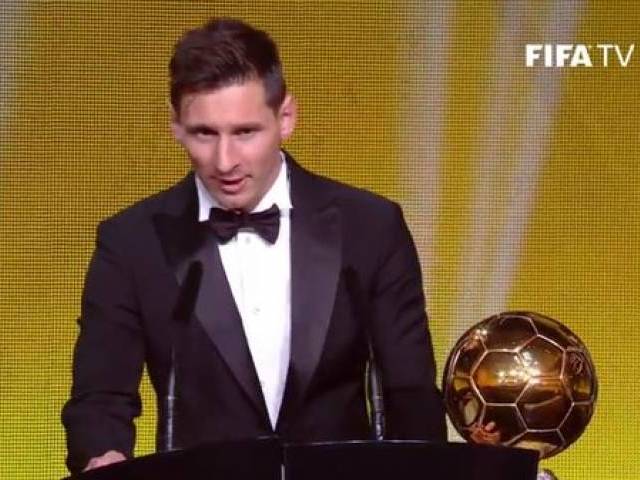 He dethroned three-time winner Cristiano Ronaldo in adding to his four consecutive awards from 2009 to 2012.

Brazil star Neymar came third in the vote of journalists and coaches.

“It’s a very special moment to come back, to get a Ballon d’Or again after the two years in which Cristiano Ronaldo won each time.

“This Ballon d’Or means a lot more than I could have ever dreamed of as a child,” said the 28-year-old Messi.

“It’s incredible that it’s my fifth, it’s much more than I ever dreamed of,” said the 28-year-old Messi.

Although he became the first ever player to win the award five times, Messi had said earlier that he would swap all those individual accolades for a World Cup success.

#Messi now has more #BallondOr trophies than you can fit into one tweet… pic.twitter.com/5a6YU6yRYv

“Team awards are more important than individual ones,” he said, before adding that the World Cup “is every player’s objective, it’s really the pinnacle”.

Messi and his Argentina teammates came close to winning the World Cup in Brazil in 2014 but were beaten 1-0 by Germany in the final.

His Barcelona boss Luis Enrique won the coach of the year award while Jill Ellis took the women’s trophy.

She had guided the US to women’s World Cup glory in Canada last summer, beating Japan 5-2 in the final.

Carli Lloyd scored a hat-trick in that match and that was enough to help her land the FIFA women’s player of the year gong.

Brazilian Wendell Lira won the Puskas award for goal of the year for his spectacular overhead bicycle kick for Atletico Goianiense against Goaianesia in a regional league match, edging out Messi’s own mazy dribble against Atletic Bilbao in last season’s Copa del Rey final.

Barca and Real dominated the team of the year as well with four players each, including Messi, Neymar and Ronaldo.