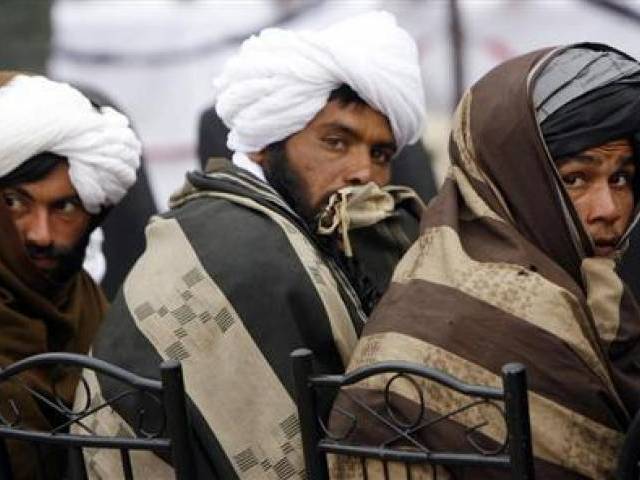 Afghan Taliban look on after handing over their weapons as they join the Afghan government's reconciliation and reintegration program in Herat province, February 17, 2013. PHOTO: REUTERS

ISLAMABAD: Top officials from Pakistan, Afghanistan, China and the United States will meet in Islamabad today (Monday) to finalise a roadmap for resurrecting a stalled peace process in Afghanistan, the Foreign Office said on Sunday. Afghan officials say Islamabad will identify ‘reconcilable’ Taliban at the meeting of the Quadrilateral Coordination Committee.

Prime Minister’s Adviser on Foreign Affairs Sartaj Aziz will chair the meeting where attendees will include Afghan Deputy Foreign Minister Khalil Hekmat Karzai and the special representatives of the United States and China for Afghanistan. The meeting was announced after quadrilateral talks during the ministerial meeting of the Heart of Asia-Istanbul Process in Islamabad in early December, but the date was confirmed by officials on Sunday.

Taliban toughen stance on peace talks ahead of quadrilateral meeting

However, after China and the US encouraged both Islamabad and Kabul, the two sides agreed to pursue the reconciliation process. Army chief General Raheel Sharif then travelled to Kabul as part of efforts to expedite the peace process.

While Adviser to Prime Minister on Foreign Affairs Sartaj Aziz will address the opening session of the quadrilateral meeting, Foreign Secretary Aizaz Ahmed Chaudhry will represent Pakistan in formal talks.

Diplomatic sources told The Express Tribune that Hekmat Karzai arrived in Islamabad Sunday evening at the head of a four-member delegation to represent Kabul at the talks. He was one of the senior members of the Afghan team that had taken part in the Murree talks with the Taliban.

The Afghan Taliban have dismissed reports that some of their leaders could participate in the quadrilateral meeting.

Two Taliban leaders, who spoke to The Express Tribune on the condition of anonymity, warned their comrades that unsanctioned participation in the meeting would result in expulsion from the group.

Earlier reports suggested that the Taliban deputy chief Sirajudin Haqqani could join the talks. “There is no truth in these reports. Siraj has no time to take part in any meeting,” one Taliban leader said, but warned that some ‘fake’ people could attend the meeting posing as Taliban leaders.

At the meeting, Pakistan is expected to unveil a list of Taliban insurgents who are willing to negotiate. “Based on the four-way agreement, Monday’s meeting will discuss the mechanism for peace talks,” Javed Faisal, a spokesperson for Afghanistan’s Chief Executive Abdullah Abdullah said.

“The Pakistani government will present the list of Taliban who are willing to talk and those who are not interested in talks,” he added.
Published in The Express Tribune, January 11th, 2016.