The legend­ary ghazal singer will perfor­m with his son in Kolkat­a on Januar­y 12
By IANS / Entertainment Desk
Published: January 6, 2016
Tweet Email 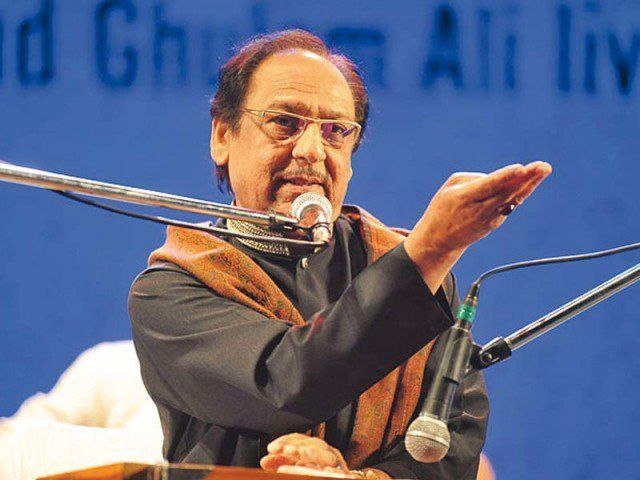 The legendary ghazal singer will perform with his son in Kolkata on January 12. PHOTO: FILE

Last year, Ghulam Ali’s performances were forcefully cancelled in Mumbai and Pune due to political uproar caused by the Shiv Sena. This year, however, things take a turn for the better as the Pakistani ghazal maestro and his son prepare to perform in Kolkata.

The legendary singer will be performing at an event organised by the West Bengal Minorities Development and Finance Corporation (WBMDFC) on January 12.

Ghulam Ali was due to perform in Mumbai in October 2015 when Shiv Sena leaders objected to the idea of a Pakistani artist singing in the city.

However, the noted ghazal singer was more upset about the matter than angry. In an interview with NDTV, Ghulam Ali had said, “I’m not angry, but very hurt. I have always got love in India.”

Bengal Chief Minister Mamata Banerjee condemned the act and immediately extended an open invitation to the singer to perform in Kolkata.

“Mamata Banerjee was eager to host the legendary singer and accordingly we wrote to Ghulam Ali urging him to perform here. He has confirmed his participation at the event,” Trinamool Congress MP and WBMDFC chairman Sultan Ahmed told IANS.

Allaying fears of any opposition to the event in the wake of the terror attack at the Indian Air Force base in Punjab’s Pathankot, Ahmed said elaborate security arrangements will be made.

“Several eminent personalities including the chief minister will be present at the event. Elaborate security arrangements will be put in place,” he said.

#Kolkata #Breaking Ghulam Ali and his son to perform in the city on Jan 12 at Park Circus Maidan. Colleagues doing presser at 3.30

I’m not angry but very hurt. I have always got love in India: Ghulam Ali

Earlier, Mamata Banerjee had condemned the act of cancellation by the extremist party. She took to Twitter to express her views saying: “Music has no boundaries. Music is the rhythm of the heart. Ghulam Ali Ji concert can be held in Kolkata. We will make all arrangements.”