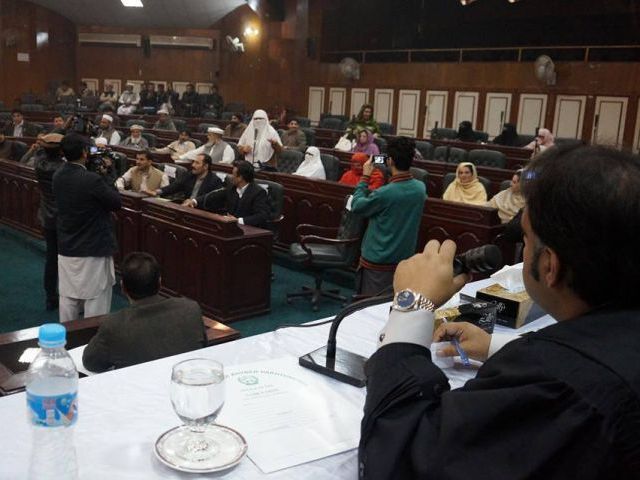 PESHAWAR: Although PTI has long been promising the devolution of power to the grass-roots level, City District Government Peshawar members have insisted some key powers have been wrestled away by the K-P administration. A quick glance at the K-P Local Government (LG) Act 2013 and Rules of Business (RoB)corroborates this claim.

A Pakistan Peoples Party (PPP) senior leader and CDG opposition leader, Razaullah Khan Chaghermatti, told The Express Tribune that under the previous local government setup, the district nazim was the authority to prepare the Annual Confidential Report (ACR) of government officers. He would also be responsible for the law and order situation. However, the powers were since given to the deputy commissioner.

The RoBs suggest that the deputy commissioner (DC) was the authority to prepare of the ACR. In addition, powers of district development committee (DDCs) and all their financial matters were handed over to the DC, as stated in the RoBs. Another district government treasury member, requesting anonymity, said the RoBs were not in their favour. However, he and his peers chose to remain silent as the document was prepared by his own government.

According to PTI’s manifesto, the party would strive to create a set of local institutions which would earn the trust and confidence of the people. Citizens and community institutions would be created to monitor the delivery of services and allow people to interact with the government so that the administration becomes more responsive and accountable.

The manifesto was announced by PTI Chairman Imran Khan at a press conference in Lahore where he said local government elections would be held within 90 days if his government came into power. However, there were no polls till mid-2015 and the elected bodies took oath in August of the same year despite the fact that the ruling party took charge in 2013.

Chaghermatti criticised the violence during the local government elections, adding nine people were killed and over 30 injured. He believed the PTI leadership in K-P misguided their central chairman over the LG setup.

He said the deputy commissioner was also the posting and transferring authority under the current establishment which was unfair.

“Seven months have been passed but the K-P government was unable to devolve power,” he said. “The local government system of 2002 in General Pervez Musharraf’s regime was better than the K-P LG Act-2013,” he said. Chaghermatti explained that 24 departments, including health, education and fisheries, came under the district set-up. He recalled that the DC and district police officer were subordinates of the district nazim at the time, while in the new set-up, the district nazim has no authority to post or transfer officials.

Another district member from Pakistan Muslim League Nawaz, Rahim Dil Nawaz, said development activities still continued under the supervision of PTI lawmakers which was constitutionally against the rules. “The basic responsibility of lawmakers is to work on reforming legislation, introduce new laws and ensure the sovereignty of the region is protected.”

He pointed out that development activities were the responsibility of the local government. He was also angered by the fact that the PTI-led government failed to provide staff and office space to town, village and neighbourhood nazims. Minister for Local Government Inayatullah Khan said he failed to understand the confusion among the elected representatives.

“The Provincial Finance Commission released Rs4,293.5 million to district and town councils and dispersed Rs6,550 million to village and neighborhood for development activities.”

In terms of salaries for the elected officials, the local government secretary sent a summary of Rs500 million to Chief Minister Pervez Khattak and the amount would be released soon for village, neighbourhood, tehsil and district members. In addition, Rs1,750 million was issued to rent offices at village and neighbourhood councils.