From Ayyan’s biopic to Shaan’s patrio­tism, here’s how some forthc­oming events may pan out
By News Desk
Published: December 31, 2015
Tweet Email 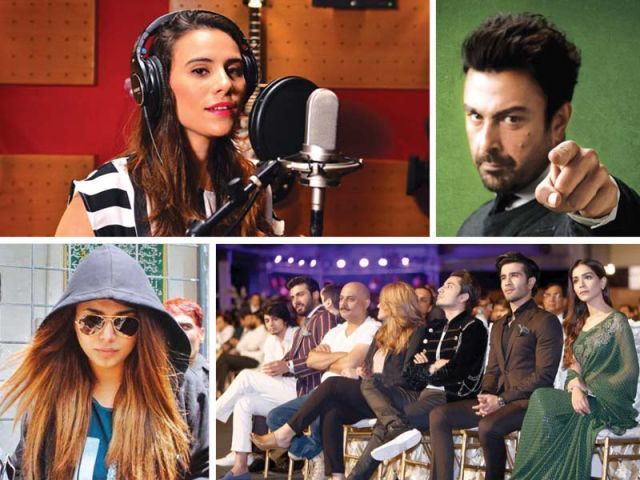 Here’s how our crystal ball anticipates things will unfold in the entertainment industry .

Predicting the future is a fashionable currency these days. With curtains drawn on the year that was, we fetch our grand old crystal ball from the attic and look at seven things that could happen in the months to come. The year was all about supermodel Ayyan. Be it the tense thrillers that her arrest and bail turned out to be or the media’s reporting on the issue that reeked of sexism and objectification. No matter what you make of it, the Ayyan saga will continue to unfold well into the New Year and very soon, a film-maker will approach her with a fat cheque … to be paid in dollars, of course. Moor is undoubtedly new-age Pakistani cinema’s magnum opus. The sharp execution of a strong script, accompanied with visual spectacles, cemented Jami’s identity as the country’s finest film-maker; no wonder the movie is making the rounds at film festivals across the world. A comparison with his contemporaries suggests it is time Jami holds master classes on film-making or, better yet, make a film on ‘how to make a film’. What better to discuss over a Sunday evening cup of tea … or a bottle of fizzy drink?

Year of festivals comes to a close Shaan is one of the most versatile actors in the industry, who has either played a gung-ho jutt, a law-enforcement officer or both in each of the 576 odd films he has done so far. The year 2016 will see the acting giant start a private limited company that will sell certificates of patriotism. It will be compulsory for actors mulling prospects of working across the border to obtain NOC from the firm before proceeding.

Cricketers will take over film and music awards Both Pakistani cinema and cricket have begun to germinate once again. New films are coming out left, right and centre, and the country’s first-ever professional sports league is being initiated, making it necessary for reciprocation by award and launch ceremonies to honour and promote local talent. Just to maintain a balance in the universe, the next time film or music awards are put together, we will find actors and film-makers, such as Shoaib Malik, Umar Akmal, Sohail Tanvir, and their beaus take the front seats and cricketers, such as Fawad Khan, Ayesha Omar and Ali Azmat, sit right next to the exit … right beside the biryani table. As for Shahid Afridi, wasn’t he always on the other side?

Zoe Viccaji and Ayesha Omar will bring home the Grammy Two of the brightest music talents in the country, Zoe Viccaji and Ayesha Omar, will team up to piece together a cover album of Ustad Baray Ghulam Ali Khan’s thumris. With Pakistani best album awards already in their drawing room showcases, they will head to the Grammy’s and bring home the accolade. The next time we know there’s a sale at one of the designer outlets, Ultimate Fighting Championship will be airing live feed for mixed martial arts enthusiasts across the globe. What better than monetising hormonal clothing fetishism and extracting healthy entertainment out of an annual ritual? After successfully keeping YouTube out of our reach, the government will initiate a historic move — slap a ban on companies making fizzy drinks, SIM cards and coffee from ‘manufacturing’ Pakistani music. Sources say the defence ministry is already drafting a bill to be presented in the Lower House … indeed, defence against this exploitation is vital. The bill adds making tributes, covers, honouring folk music and pushing them down the people’s throats will be punishable by law.