Violence against women: 862 cases reported in second half of 2010

Violence against women: 862 cases reported in second half of 2010 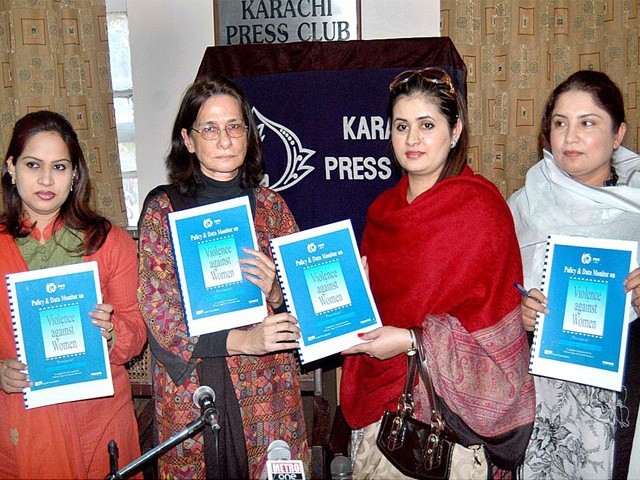 KARACHI: The second half of 2010 turned out to be somewhat better, at least where  women in Sindh are concerned, since the total number of cases of violence against women fell from 940 to 862, according to a report of the Aurat Foundation.

The Aurat Foundation launched its half-yearly report on violence against women, which bracketed the total number of cases into 10 categories of crime.

For the past three years, the NGO collects data under the project ‘Policy and Data Monitor on Violence against Women’.  The programme aims at highlighting women’s issues, creating public awareness and positively influencing policy making, said Shireen Aijaz, coordinator of the foundation. She said that the slight decrease in the number of cases in the second half of the year may be because the flood in the province diverted media attention from the usual problems.

The report noted a total of 712 cases of violence, which affected 862 women in the 23 districts of Sindh. There were 119 incidents of honour killing, in which 98 women and 39 men were killed. Sixty-two cases of rape and 61 suicides were recorded while 159 women survived murder attempts.

Meanwhile, 103 cases of abduction/kidnapping, 24 of sexual assault, 78 of domestic violence and 34 others of custodial violence, customary practices, attempted suicides, threat to violence and trafficking and torture were also recorded. Talking to The Express Tribune, Mehnaz Rehman, Resident Director of the Aurat Foundation, said that honour killings are on the rise, especially in Sindh, with 147 cases reported in the first half of 2010.  She believes it is because of weak laws. “Despite a ban, jirgas are still being held. The criminals can easily escape and there are no strict punishments,” she said.

Those involved in honour killings should be treated like any other murderers, she said. “It is not sudden provocation. It is cold-blooded murder,” she added.

The report showed that at least 24 jirgas were held in the province to ‘dispense justice’ in women-related cases. Eight women were given in compensation to settle tribal conflicts or free-will marriage issues.

More than eight cases were registered against persons who held jirgas.

The report also shed light on custodial violence and 105 women/girls were tortured or arrested by police.  Also according to the data, FIRs were registered for 341 of these cases while it could not be registered for 323 cases. In 51 of the cases, the status of FIR could not be ascertained. MPA Marvi Rashdi was also present on the occasion so she could give a briefing on the efforts taken by the government. “When it comes to women’s rights, all the parties have the same stance,” she said. However, the bills on women issues are often at the bottom of the government’s priorities, she regretted.

Rehman added that even when there is some will on the part of the government, the opposition jumps in. She concluded by saying that the National Assembly had passed a bill on domestic violence, which then got stuck in the Senate since those affiliated with the right wing said it would lead to more divorces in the country.