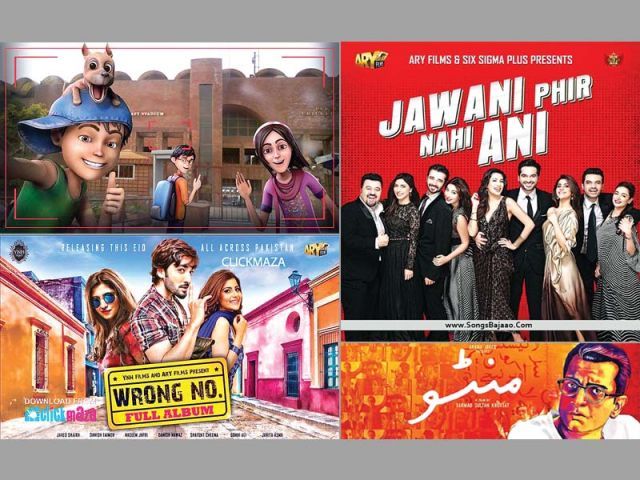 The past 12 months saw the Pakistani film industry flourish immensely, and the coming year looks just as promising. With box office clashes and back-to-back releases of over a dozen films, one can rightfully say that 2015 was a launch pad for Pakistani films that will see a major boom in forthcoming years.

Here is a list of the top 5 films that made it big this year, with Jami’s Moor topping The Express Tribune’s list. We ran a poll on our website and our readers declared Jawani Phir Nahi Ani as the film of 2015. If Shoaib Mansoor’s Khuda Kay Liye encouraged Pakistani film-makers to make films then Nabeel Qureshi’s Na Maloom Afraad gave them the local recipe for a masala film. A simple urban tale interwoven in the true Pakistani spirit of facing hardships with a smile, garnished with the right amount of romance and drama. Yasir Nawaz’s Wrong No. employed the same trick and succeeded to a certain extent.

Sallu (Danish Taimoor) belongs to a family of professional butchers who instead of adopting the family trade wants to become an actor. His father Hajji Abba (Javed Sheikh) wants his son to get a job and the friction between the father and son continues until Sallu runs away from home. What follows is an often funny and sometimes boring comedy of errors, layered forcefully with music and a plot that is well constructed but borrowed from various Bollywood films. The strength of Wrong No. lies in some of its very strong and engaging situations that surgically carve the humour out of everyday Pakistani life.

The year that saw Pakistani cinema surge ahead Sharmeen Obaid-Chinoy’s 3 Bahadur is an effort to give the children of today a chance to think and dream about local heroes. The movie is based in Roshan Basti where everything seems to be going fine until Mangu (Ally Khan) meets Baba Balaam (Nadir Siddiqui) who disappears after giving Mangu the key to evil powers. Mangu starts using those powers against the innocent dwellers of the town until Kamil (Hanzala Shahid), Saadi (Zuhab Khan) and Amna (Muneeba Yaseen) sneak into the tower where he lives. There, they are gifted with special powers by a flying object (not clearly identified in the film). Thus begins a war of good against evil and the old order versus the new. Despite being a surface-level attempt at the art of animation, 3 Bahadur’s post-production team deserves credit for giving hope to Pakistani animation artists.

Sarmad Khoosat’s biopic of the towering short story writer was one of the most talked-about films to come out this year. The film follows troubled years of the late writer’s life wherein financial pressures, personal dilemmas, creative pursuits and socio-political happenings all coincide. Jamal Rahman’s music is of little help to the film’s narrative that otherwise fails to do justice to the genius of the writer.

It entails some very genuine casting and scripting issues along with a plethora of anachronisms. Sarmad playing the titular role along with Sania Saeed who plays the character of Safiya, the writer’s wife, at best keep the film together. It leaves a bad taste in the mouth for those who have lived with Manto’s fascinating world. For those who were introduced to the genius by the film, it was a winner all the way.

Moor is out of the Oscars race Whatever is said about the importance of art house cinema, it is paisa vasool entertainers like Jawani Phir Nahi Ani that are oxygen for the industry. The Humayun-Vasay duo provides exactly that, albeit with a few impurities andf even pressure.

Saif (Hamza Ali Abbasi), BB (Ahmed Ali Butt) and Sheikh (Vasay Chaudhry) are longtime pals unduly tired of their wives and, in some cases, in-laws for being control freaks. One odd day, their filthy rich friend Sherry (Humayun Saeed) returns from the US and mocks them for surrendering to their wives. He paves the way for a getaway by putting together an all-boys trip. What follows is a joyride that keeps you glued to the seat for the most part. Jami managed to pull off the seemingly impossible with Moor. He gave us a true Pakistani film sans being pretentious or preachy and makes the much rural and suburban concept of ‘love for your motherland’ moving for urban audiences. This breathtaking emotional journey not only highlighted the lost livelihood in Balochistan but also gave us hope that Pakistani cinema will not be an extension of Bollywood.

The film follows the story of Wahidullah (Hameed Sheikh), the station master of Khost railway station, who reluctantly agrees to sell off the railway infrastructure due to political pressure and promised financial benefits. But as his son Ahsanullah (Shaz Khan) moves to Karachi, he confronts the dilemma of letting go of what is his, in search for a better tomorrow. The simple yet thoughtful execution of this conflict makes it dark to the very core, making it a dense, emotional experience for the viewers. It is also an engaging collection of non-linear sub-plots that meet for a definite purpose while enticing you with enough twists and turns to keep you fastened to your seats.