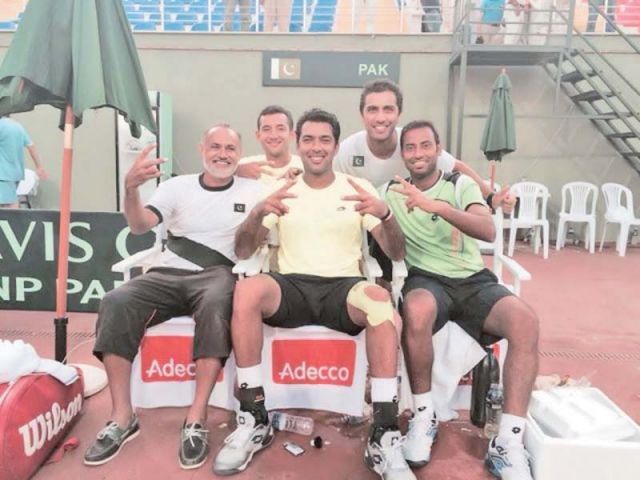 Aisam and Aqeel have been representing Pakistan in the Davis Cup since 1998 and, to date, have played 37 and 45 ties respectively. PHOTO: FILE

It took them nine years, but Pakistan tennis torchbearers Aisamul Haq Qureshi and Aqeel Khan finally lifted their country back into Davis Cup’s Group I of the Asia-Oceania Zone after beating Chinese Taipei 3-2 in Group II’s final this year.

What makes the achievement even worthier is the fact that Pakistan have not played even a single tie of the premier international team event on their home ground since 2006, and this year was no different.

The national team’s 2015 campaign kicked off in March in Sri Lanka with a 3-2 win over Kuwait in round one as Aisam and Aqeel both won a singles matches each and teamed up for a doubles victory as well.

Next up was a clash against hosts Indonesia in July, but just a few days before the event, the team was dealt a blow with the news of Aisam’s knee injury that he picked up in Wimbledon, effectively ruling out his participation in the tie.

Nevertheless, the remaining trio of Aqeel, Abid Ali Khan Akbar and Samir Iftikhar held their nerve to emerge victorious, with all of them winning a singles match each to ensure a 3-1 dominance over their hosts.

Come September, Pakistan were once again told by the International Tennis Federation (ITF) to hold their home tie and Group II’s final elsewhere — either at a neutral venue or on their opponents’ soil — as the governing tennis body still deems the country unsafe to organise any international matches.

Rather than visiting their adversaries Chinese Taipei for the decider, the Pakistan Tennis Federation sought help from their Turkish counterparts, who not only agreed to offer their courts for the tie but also invited Pakistan’s players to train with theirs ahead of the matches.

On September 18, Pakistan stepped onto Turkey’s hard courts on day one of their campaign against Chinese Taipei, unsure of what to expect from the Far East side against whom they last played in 2006 and lost. Moreover, Taipei had only been relegated from Group I last year, while Pakistan have not played in that group since 2006.

The uncertainty continued after the day’s conclusion as Aqeel won his singles match in four sets and Iftikhar lost his.

But day two saw Pakistan edge Taipei in the doubles rubber, courtesy of Aisam and Aqeel’s heroics that resulted in their team leading 2-1. However, Aqeel lost his reverse singles match the next day after a gruelling five-setter, which tied the proceedings 2-2.

Now all eyes and hopes were centred on Aisam to come through for Pakistan, which the veteran did in four long and exhausting hours, giving the final push to his country’s ascendancy to the next level.

Pakistan were back in Group I at last.

2015 was phenomenal for Great Britain, who had last lifted the Davis Cup trophy in 1936 and were ever since missing that one important link in their tennis line-up who would bring the country back into reckoning.

Andy Murray, the current world number two, finally broke through the 79-year deadlock as he led from the front in Britain’s victories over US, France, Australia and finally Belgium in the World Group.

Davis Cup Group I: Light at the end of the tunnel for Pakistan

Murray is nothing short of a talisman for the UK, starting with his gold medal-winning performance at the 2012 London Olympics when he beat the legendary Roger Federer in the final. He then won the US Open the same year to become the first British player since 1977 and the first British male to win a Grand Slam singles tournament. His Wimbledon title the following year also made history as he became the first British winner of the men’s singles title since Fred Perry in 1936.

The Scot is not one to shy away from national duty, and that showed this year when the 28-year-old even considered opting out of ATP’s elite season-ending World Tour Finals just so he could channel his preparations for the Davis Cup final.

Murray won all three of his matches — two singles and a doubles rubber — to give Britain an unassailable 3-1 lead in the decider and consequently their 10th Davis Cup title, which made the nation the third most successful team in the event’s history.

The two-time Grand Slam champion may be the weakest link among tennis’ Big Four — including Novak Djokovic, Federer and Rafael Nadal — but it will be long before his vital contributions in Britain’s emphatic Davis Cup victory are forgotten.