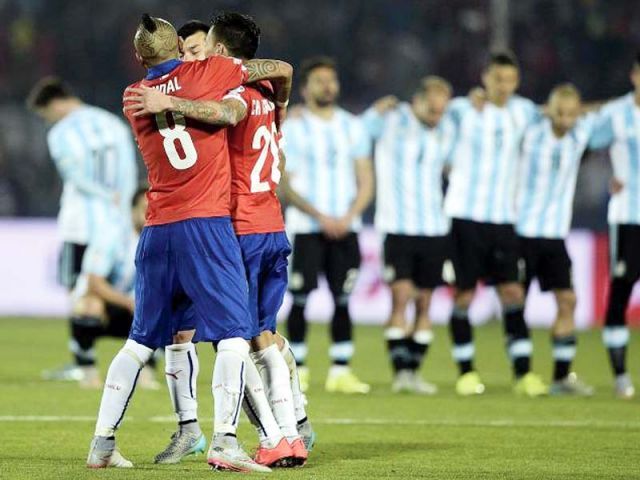 The Argentinians, who had enjoyed an unbeaten run to the Copa America final, were stopped in their tracks by a relentless and focused Chile. PHOTO: AFP

Just as witnessed before the start of the 2014 World Cup in Brazil, the same question lingered in the media circles ahead of the 2015 Copa America: Can Lionel Messi finally get his hands on a major trophy with his national side?

The diminutive Argentine had suffered heartbreak at the hands of Germany at the Maracana and had little time to pick himself after the World Cup disappointment, but as is usually the case with legends who emerge stronger after every fall, Messi picked himself up, more determined than ever to shine.

The 28-year-old went on to re-write history with Barcelona by guiding the Catalans to the La Liga, Copa del Rey and Champions League crown to not only allow the Blaugrana to become the first side to ever complete the treble twice, but made telling contributions by scoring 58 times in all competitions and registering the most assists in Barca’s Champions League (6) and La Liga (18) campaigns.

Hence the excitement ahead of South America’s premier competition for La Albiceleste supporters was justified; their team had finished second in the world a year ago and their captain was in the form of his life.

Finally, the Argentinians’ long wait for a major trophy could end.

Yet, the cruel nature of life does not allow fairytale endings as the Argentinians, who had enjoyed an unbeaten run to the Copa America final, were stopped in their tracks by a relentless and focused Chile, who, propelled by the enthusiasm and grit of Alexis Sanchez and Arturo Vidal, managed to make their own history by being crowned the champions of South America for the first time.

Chile had scored the most in the group stages (10), which included the 5-0 thrashing of Bolivia, and had overpowered defending champions Uruguay and Peru in the quarter and semi-final respectively with ease to sit in prime position to lift their first-ever Copa America trophy.

Argentina, on the other hand, had experienced a slow start, finding the net only four times in the group stages, and had only managed to brush past a resolute Columbia 5-4 on penalties in the quarter-final. However, it was then that Gerardo Martino’s side clicked into gear and thrashed Peru 6-1 in the semi-final to once again fuel speculations that this could be the year when Argentina could end their 22-year major trophy drought.

Amid much fanfare, both sides contested the final at the Estadio Nacional and found it difficult to break each other’s backs in normal time. With the game still goalless at the end of 120 minutes of play, the Argentine supporters started getting a bit frantic as the game would now go to penalties, which entailed that anything was possible.

And just what the Argentinians were dreading came to pass. Gonzalo Higuan shot the ball way above the goalpost and Ever Banega missed his to give Chile a 3-1 advantage and when Sanchez converted his, Santiago burst into jubilation — Chile were crowned champions and Messi’s search for honours with the national side still continued.