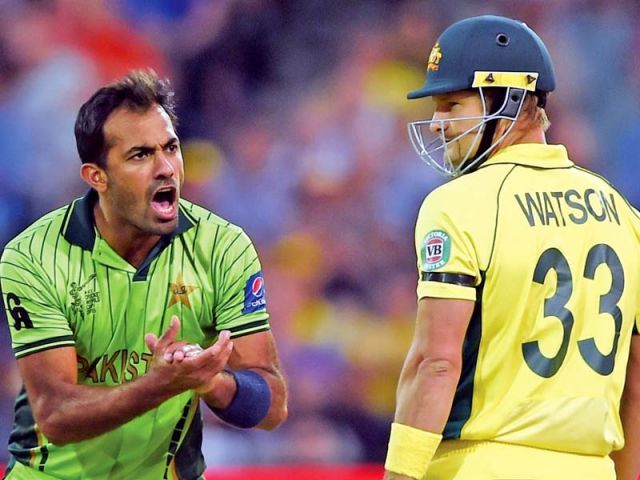 The video of Wahab clapping in Watson’s face repeatedly went viral and was replayed throughout the remaining broadcast of the 11th World Cup. PHOTO: AFP

For  someone termed as ‘tuk tuk’ and accused of being too defensive throughout his career, Misbahul Haq’s attacking leadership abilities were on full display at the 2015 World Cup, which won the hearts of his critics and fans alike.

Prior to the World Cup, Pakistan lost fast-bowler Junaid Khan to injury, while veteran Mohammad Hafeez also returned to the country as the Men in Green lost their second off-spinner after the suspension of Saeed Ajmal.

While the World Cup was a grand event in itself, the Men in Green’s opening match against arch-rivals India was an even bigger attraction. However, Pakistan lost the encounter in anticlimactic fashion, courtesy of poor planning and fielding.

Umar Akmal was handed the gloves as regular keeper Sarfraz Ahmed was benched, while Younus Khan was asked to open and Hafeez’s replacement, Nasir Jamshed, sat out.

Inevitably, both Akmal and Younus fared badly after being placed in unfamiliar territory.

Sohail Khan, who came in as a last-minute inclusion along with Wahab Riaz, picked up a five-wicket haul but India still managed to make 300.

Pakistan were next humiliated by the West Indies in the second group match, with the Men in Green being 1-4 at one point.

In off-field matters, the controversy involving Moin’s visit to a casino also emerged and while the chief selector denied any wrongdoing, the Pakistan Cricket Board called him back to avoid a backlash from fans.

In a do-or-die situation, Misbah’s charges managed to beat Zimbabwe courtesy of the skipper, who top-scored with 73, and Wahab, who first scored a quick-fire 56 and then shared eight wickets with Mohammad Irfan.

Following the confidence-boosting win, Pakistan then downed UAE, with Ahmed Shehzad missing out on a century and Haris Sohail and Misbah scoring fifties.

Sarfraz was finally called up for the match against South Africa, where he was asked to open.

The wicketkeeper duly delivered with a run-a-ball 49 as well as six catches to claim the man-of-the-match award. Seniors Younus, Misbah and Shahid Afridi chipped in with important contributions with the bat while quicks Irfan, Rahat and Wahab took three wickets each as Sohail bagged the most important scalp of South Africa captain AB de Villiers.

Sarfraz followed his triumphant outing against the Proteas up with a century against Ireland, and was again declared the man of the match for the second time in as many matches.

However, he failed to shine in the quarter-final against co-hosts and eventual winners Australia, who beat Pakistan by six wickets. What stood out, though, was Wahab’s fiery spell, especially against Shane Watson, with Glenn Maxwell also getting a taste of real fast-bowling.

Pakistan were without spearhead Irfan, but Wahab more than made up for the towering quick’s absence not only with his intimidating bowling but also turning the match into an entertaining spectacle.

But he was let down by fellow pacemen Rahat and Sohail, who dropped Watson and Maxwell respectively, and Pakistan bowed out with Wahab in tears.

The exit signalled the ODI retirements of veterans Misbah and Afridi after illustrious careers.