Backed by Saudi Arabia, Jaish al Islam was one of the most influe­ntial armed groups invite­d to opposi­tion talks
By AFP
Published: December 27, 2015
Tweet Email 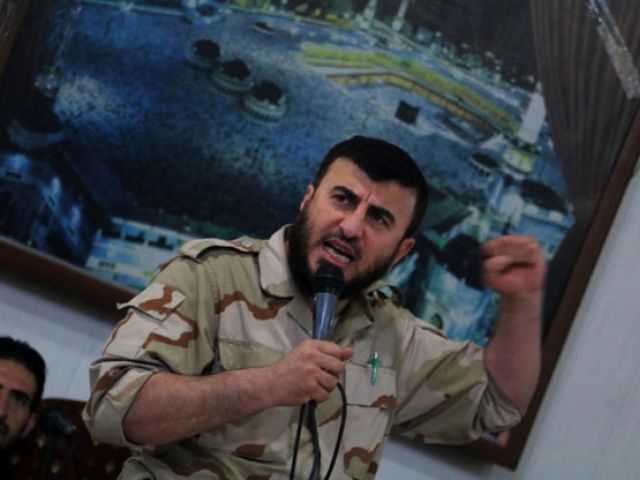 BEIRUT: The killing of Syrian rebel chief Zahran Alloush, fiercely opposed to both the regime and the Islamic State group, has eliminated a key bulwark against the terrorists and could derail UN-brokered peace talks, analysts say.

The head of Jaish al Islam, the foremost rebel group in Damascus province, was killed on Friday in an air strike claimed by Syria’s government.

Jaish al Islam has fought off both government forces and IS terrorists in its Eastern Ghouta bastion, east of the capital.

It even recently agreed to eventual peace talks with the regime of Bashar al Assad.

But with Alloush gone, that centralising force has vanished, says Andrew Tabler, analyst at the Washington Institute for Near East Policy.

“He occupied a space between the extremists and the Free Syrian Army, which was important to hold off the spread of IS in the short term and unify the rebels vis-a-vis the regime in the long term,” says Tabler.

Without him, fighters could lean towards further radicalisation and join terrorist groups, Tabler adds.

Despite Alloush’s ferocious opposition to IS, Syria’s regime and its media consistently referred to him and to Jaish al Islam as “terrorists”.

Syria’s army command did so again in the statement claiming responsibility for his death.

Damascus has used the term for all its opponents — including US-backed rebels — since the conflict erupted in 2011.

It has strived to present itself globally as a legitimate government fighting terrorist groups across the country.

Alloush’s death is “a major blow to the rebels,” says Karim Bitar of the Institute for International and Strategic Affairs.

“It might temporarily help the regime, as his disappearance reinforces the binary Assad-versus-Daesh dichotomy,” Bitar tells AFP, using the Arabic acronym for IS.

It could also thwart potential peace talks between the regime and the opposition, which the UN announced could begin in less than one month.

His killing is “a severe blow to the Riyadh negotiations process. In the past two years, the Saudis have been propping up Alloush and trying to present him as an alternative,” Bitar says.

Jaish al Islam will need time “to recover from this blow and for the alternative leadership to emerge,” he adds.

And given Alloush’s fate, other groups participating in the talks could back out.

“His death shows the severe disincentive of Islamist groups to stay in the negotiations outlined by the UN,” Tabler tells AFP.

In a statement released Saturday, UN peace envoy Staffan de Mistura said he would aim to convene the landmark meeting between the opposition and the regime on January 25 in Geneva.

He expressed hopes the “broadest possible spectrum” of opposition representatives would be involved, adding: “Continuing developments on the ground should not be allowed to derail it.”

Backed by Saudi Arabia, Jaish al Islam was one of the most influential armed groups invited to broad-based opposition talks in Riyadh earlier this month.

Representatives in the Saudi capital agreed to eventual negotiations with the regime and were set to choose at least part of the opposition delegation for upcoming talks.

The son of a Salafist preacher, Alloush took up arms as part of Syria’s uprising shortly after being released from prison in a general amnesty.

He often expressed his hatred of Shia Muslims and Alawites — the sect of Assad’s clan — but recently began reeling in his sectarian diatribes and attempted to present his group as more moderate or nationalistic.

“Alloush tried to come off as a constructive, responsible centrist, an anti-terrorist ally, and an all-around gentleman,” writes expert Aron Lund on the Syria Comment website.

“You know, the kind you’d like to see in a coalition government.”
With him gone, more hardline groups could step in to fill the void in Eastern Ghouta.

“It is possible the death will be a significant blow to Jaish al Islam because the movement has been heavily centred around (Alloush) as an individual,” says Syria analyst Aymenn al Tamimi.

Tamimi said other groups in Eastern Ghouta, like hardline group and al Qaeda ally Ahrar al Sham, will now “move to assert more influence in the political landscape there.”