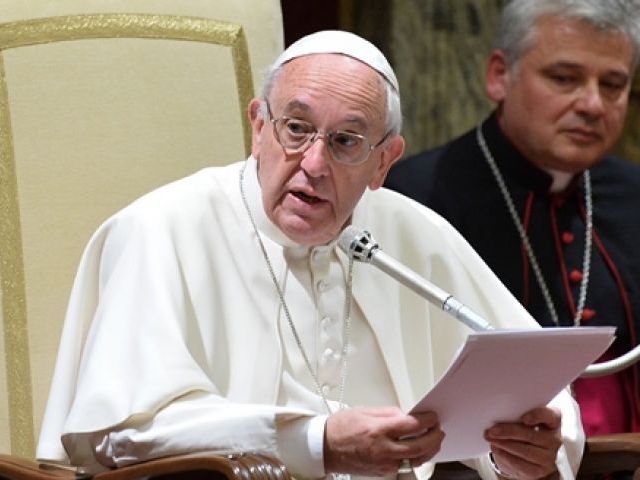 VATICAN CITY: Pope Francis ushered in Christmas by urging the faithful to reject the materialism that pervades the gift-giving season, and to embrace “simple, balanced” values, as violence subdued festivities in the Holy Land.

The pontiff, at his annual Christmas Eve Mass at Saint Peter’s Basilica, called on Christians everywhere to push back against the excesses of modern society, which he said was “so often intoxicated by consumerism and hedonism, wealth and extravagance, appearances and narcissism”.

Christianity calls on believers “to act soberly — in other words, in a way that is simple, balanced, consistent, capable of seeing and doing what is essential,” said the 79-year old pope, leader of the world’s 1.2 billion Catholics.

In many countries across the world, Christians were fearful for their future, and some were even prohibited from celebrating the holy day, a state of affairs that did not go ignored by Francis.

“In a world which all too often is merciless to the sinner and lenient to the sin, we need to cultivate a strong sense of justice, to discern and to do God’s will,” the Argentine pontiff said.

Condemning a “culture of indifference which not infrequently turns ruthless”, the pope asked Catholics to combine prayer with an attitude of “empathy, compassion and mercy” after a year of global unrest that saw one million migrants and refugees, mostly from Syria, reach Europe in search of a better life.

Amid an unusually heavy security presence in Saint Peter’s Square, the visibly pale pontiff, who is reportedly suffering from the flu, in a hoarse voice called on believers at risk of persecution to resist fear.

Half a world away in Bethlehem, the head of the Roman Catholic Church in the Holy Land arrived for the traditional midnight mass at the Church of the Nativity — built over the site where Christians believe Jesus was born.

Travelling from Jerusalem nearby, the Jordanian Latin patriarch Fouad Twal would have had to pass through the Israeli wall that separates the two cities, with Bethlehem located in the occupied West Bank.

A wave of violence has led to a sharp decline in pilgrims visiting Bethlehem and the rest of the Holy Land this year, and only a sparse crowd was on hand to welcome Twal’s procession.

Violent protests and a series of Palestinian attacks on Israelis since October have killed 129 Palestinians, 19 Israelis, an American and an Eritrean. Many of the Palestinians were attackers, while others were killed in clashes.

The Bethlehem mass commemorating the birth of Jesus will be dedicated to victims of violence and their families, Twal said, with celebrations “moderate” due to violence in the Palestinian territories, Israel and the world.

Twal has also called for parishes to switch off Christmas tree lights for five minutes in solidarity with victims of violence and terrorism. Lights on trees in Manger Square were shut off for a few minutes at 7:00 pm.

The plight of embattled Christians in the Middle East, especially where they have been threatened by the advance of Islamic State group, has been thrown into the spotlight this year, and in Iraq, the mood was also sombre.

“We are praying for the restoration of peace and security and the return of the displaced to their land,” said one worshipper, Farida, as she arrived at Our Lady of Salvation church in Baghdad, one member of a dwindling Christian community trickling in to churches.

She said 12 of her relatives lost their homes when IS took over Iraq’s second city Mosul in 2014 and ordered Christians to convert to Islam, pay a heavy tax as second-class citizens or face death.

In Somalia, the government has banned celebrations of Christmas and New Year in the Muslim majority country, saying the festivities might attract Islamist attacks.

The same is true in oil-rich Brunei, where the country’s authorities have threatened five-year jail sentences for those who violate a ban imposed on “open and excessive” celebrations.

And in the troubled nearby southern Philippines, seven Christian farmers were killed as Muslim guerrillas launched a series of attacks.

Meanwhile, the US and British embassies in China issued an unusual warning about possible threats against Westerners in a popular Beijing neighbourhood ahead of the Christmas holiday.

And security was due to be stepped up at churches in France for mass, following last month’s jihadist attacks in Paris that left 130 people dead.