A fourth cite suppor­t for a party or its ideolo­gy as reason for voting­
By News Desk
Published: December 24, 2015
Tweet Email 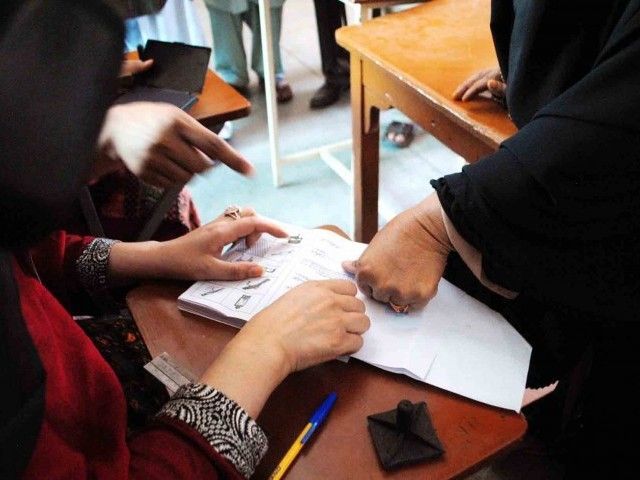 A fourth cite support for a party or its ideology as reason for voting. PHOTO: PPI

LAHORE: The most frequently cited reason for voting in a survey conducted by The Express Tribune ahead of the local government election in the province is upright character and track record for philanthropy of particular candidates (34 per cent). None of the respondents mention first-hand experience of receiving patronage but say that the candidate is known for upright character, honesty and philanthropy. Among those who cite a candidate’s reputation as their reason to vote, at least three also mention candidate’s affiliation with their preferred political party and at least two a personal relationship with the candidate.

Interviews were conducted with 111 voters in four NA constituencies, including some areas of the Walled City and some neigbhourhoods in its vicinity. The second most frequently cited reason is support for a political party (18 per cent). Among these, the highest number of respondents mention support for the Pakistan Muslim League-Nawaz (nine respondents), followed by the Pakistan Tehrik-i-Insaf (PTI) (four) and the Pakistan Peoples Party and the Jamiat Ulema Islam-Fazal (one each). Trailing behind support for a party is personal relationship with the candidate (15 per cent).  Most respondents mention friendship and neighbourly ties. About eight per cent respondents particularly cite identification with party ideology as their reason to vote. They have not been clubbed with those identified themselves as supporters of a party on grounds that the latter did not specifically mention the word ideology in their response.

The remaining (one fourth) cite past experience of good work, family influence, experimentation, social responsibility, biraderi ties and financial incentive as reasons to vote for a particular candidate.

Responses about past experience are mentioned separately because of the reference to past experience without any additional information. However, if clubbed with responses to the question on party based elections, it can be inferred that most of these respondents are referring to the candidate in his personal capacity and not because of his affiliation with a political party.

Reasons for voting among those who prefer party based election

Among the respondents who prefer party-based elections, the most frequently cited reason for voting is support for a particular party (32 per cent). However, a significant number among these respondents also mention candidate’s reputation (18 per cent) and personal relations (12 per cent) as their reasons for voting. Those who mention ideological affiliation are 14 percent of the sample.

Reasons for voting among those who prefer non-party based election

Half of the respondents who prefer non-party based elections cite good reputation of candidate as their reason to vote for them (50 per cent). The second and third most frequently cited reason among the group is personal relations (18 per cent) and past experience (10 per cent).